The corresponding fortnight will be from 23rdOctober to 6th November 2016.

The 10th day Garbottam comes with a Planetary war (Graha Yuddha) between Saturn and Venus. It started in the last quarter of the 10th day, that is, around noon of 8th January, 2016. It is going to last for the whole day of 11th day Garbottam.

These 2 days are crucial for Chennai and Tamilnadu as NE Monsoon must have been active at that time to bring rains to Tamilnadu.

But the astrological rule is that if there is a planetary war or an eclipse on any day of Garbottam, there will be “mis-carriage of pregnancy of clouds” and the corresponding fortnight will not get rains.

But the Garbottam on this 10th day is disappointing. There is an additional deterrent in the form of planetary war.

The 10th day started with a red sun at the time of setting and bluish tinted fish like clouds floating above the sun and opposite to the sun. As night progressed, the sky became clear and stars were visible as pale discs. So far it is good.

But the morning sun rise was not accompanied with streaks of cloud as was in the previous day. But they did not form aquatic shapes or any recognisable shapes. 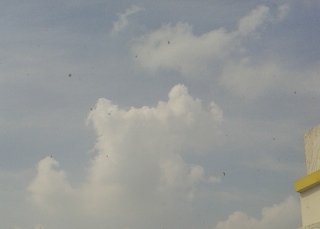 As the day progressed, clouds did not form in bulk but looked shattered by winds at their height. At the surface level, the wind was still but whenever it blew it was gentle. But the appearance of the clouds showed that they were blown away by some wind currents at their height. This was not so on other days.

This is how the clouds looked as day progressed. 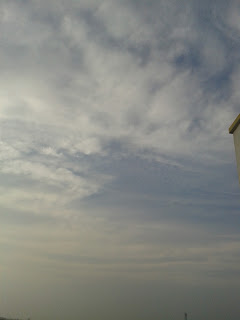 No aquatic forms were seen and for most part, the clouds could be seen shattered by upper level wind circulation.

The clouds did not glow with a halo that was noticed on the last 2 days. One important feature of Garbottam is that dense clouds must shine with a halo around them by reflecting the sun light.
Such clouds were seen on the 9th day (shown below): 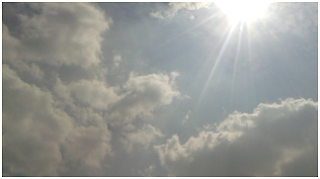 This is a good Garbottam feature.

The dark clouds rushing to hide the Sun without losing their bulk was noticed on the 8th day which is shown below: 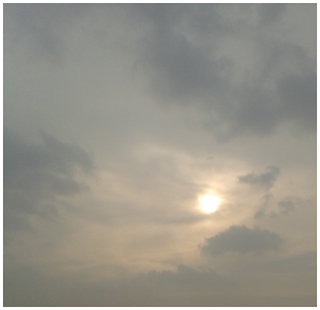 This is also a good Garbottam feature.

In those days this happened after noon, that is, in the last quarter of the day.
Compare them with the 10th day’s clouds. 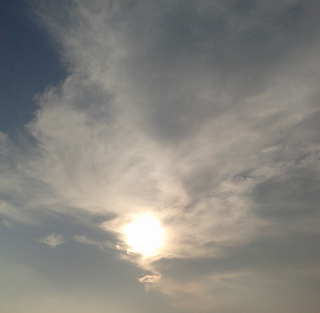 Sun with clouds at 1 PM.

A  little later this is how the clouds looked: 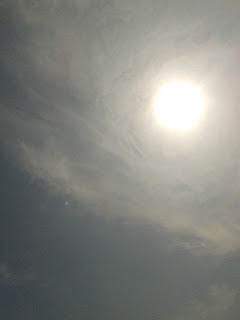 The clouds on this day (10th day) gave an appearance of having been blown away. This started from 10 AM when clouds were building up but distortions increased after noon. The time coincides with the start of the planetary war between Saturn and Venus. This feature is something which we will be checking in the corresponding fortnight.
. 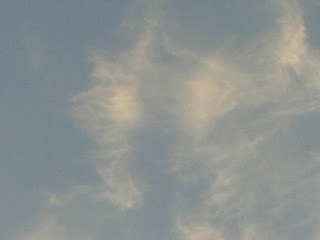 The observation of the 5 factors for day-10 are as follows:

(1) Wind:- Very less. Gentle breeze was felt at night very rarely. During the day the mild wind was hot and rare.
Result:-  Poor feature of Garbottam

(5) Clouds:-  Clouds were moving from North and North east, but they could not form as bulky ones. No aquatic forms could be noticed.
Result:- Though the direction is good, the shattering away of clouds indicates ‘mis-carriage’ of Garbottam.

(1) Terrestrial :- Behaviour of birds satisfactory,  but their movement is less, perhaps due to hotness.

(2) Atmospheric :- Of the 12 features noted in my blog on Garbottam, most of them were missing. Though there were clouds, they were not exactly dense or bulky nor they could form any shape, leave alone aquatic shape. They seem to be constantly dissipated as they form and cling together. However around the horizon, bluish tinted clouds were fused with the sky.

(3) Planetary:- (1) Planets and stars appeared pale. (2) Except Jupiter all the other planets were in Southern declinations. Planets in northern declinations are desirable. (3) Sun was red in colour at the time of sun set.

The red sun was the only redeeming feature. 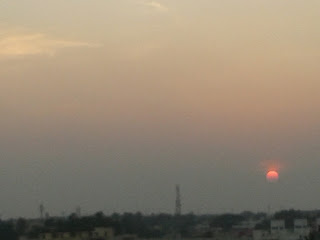 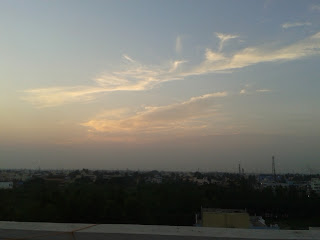 NE Monsoon:- NE Monsoon features in the Bay would be seen in the 2nd half of October. But they would not give the normal rainfall of this season. Though strong rainfall yoga exists at that time by way of Budha- Shukra Sameepyam, Venus is also moving closer to Saturn at that time while Mars will be ahead of a line up of planets.  This shows some violent formations but that could not give rains. Perhaps such formations would give rains to those places where good Garbottam features existed on this day (10th day).

It remains to be seen how the clouds on the day time of the 11th day are going to look like. But it is truly amazing that a planetary war coincided with weak Garbottam that saw clouds shattered true to the nature of “mis-carriage” of the fetes of the clouds.