The corresponding fortnight will be from 19th November to 2nd December 2016.

It was the most disappointing day. Absolutely no activity in the sky. It was a dry run for the whole of Pooradam and Utthradam that started after 11 AM this day (12th day – 10th January 2016).

The foremost Garbottam days mentioned by Varahamihira pertain to Moon in Pooradam, Utthradam and Swati. If it is cloudy on these days, with gentle air blowing and sun hiding behind the clouds very often, it is said a good “pregnancy” has happened. Such features on these days bring bountiful rains in the 195th days and in the corresponding fortnights for several days.

In the present period of Garbottam, Swati was over on day-6 of Garbottam. Pooradam was over in the 3rd quarter of day 12. Only Utthradam remains now. So far these days did not show symptoms of ‘pregnancy’. That means a dry NE monsoon season in my place of observation, that is, Chennai.
The night of day 12 was still and cloudless. The day break was too bright. Right from morning the sky continued to be cloudless on all directions. No breeze was felt.

But by 11 AM small bunches of clouds started appearing in South and West. And gentle wind was felt from east, south and south east and later from west.

Till the 8th day of Garbottam, the wind was felt form North and Northeast. The 8th day coincides with Navarathri. But there after the winds were much less though cloud movement was noticed from north.

For the first time on the 12th day, coinciding with NE Monsoon, winds and clouds were moving from south and west.

For North east monsoon, the direction of the wind from 11th to 13th day of Garbottam must be from South, west and South west. Only in the last quarter of the 12th day, winds could be felt from south east, at times from South west and west. For most part of the day time of the 12th day, the wind was from South east. That means the wind direction in the corresponding period will be from North West which means winds from land area. Such winds can push away the clouds from east and south east that usually bring rainfall to Chennai and Tamilnadu.

The small bunches of clouds that were found only in the southern sky and western sky in contrast to complete absence of clouds in north and east was also a new phenomenon of this 12th day.  The few lone clouds seen in the Western sky after 11 AM is shown below. They were moving from South to North. 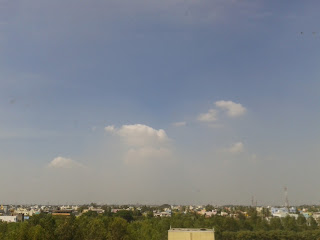 In the left hand corner transparent and vague cloud formation can be seen. 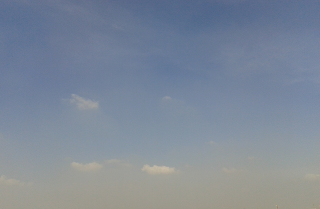 The Sun was a loner in the sky. 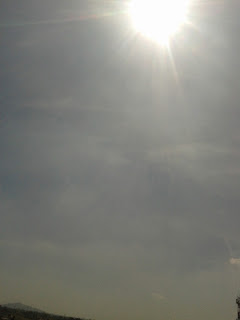 The northern sky remained featureless throughout the day. This happened for the first time in this Garbottam season. 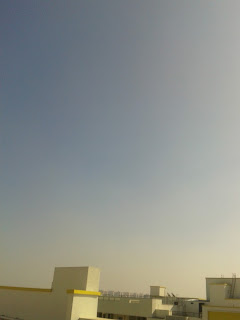 The scarce cloud movement in the south and west lasted between 11 AM and 2 PM only. After that the clouds disintegrated. The western sky sported a long transparent cloud around 2 PM like this: 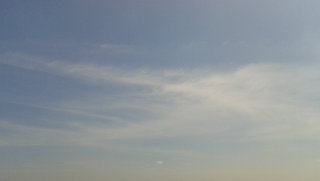 Does it look like the mouth of a frog or the beak of a stork? Can this be categorised as an aquatic feature of Garbottam?

Over all it was a disappointing day. The sun was hot and scorching throughout.

Even a few minutes before setting, it was bright and yellowish. Only at the time of setting (hiding behind the haze of the horizon), it turned red. 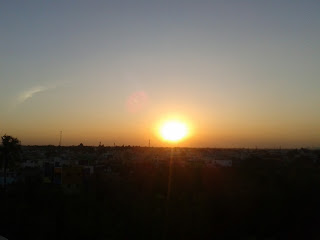 This was in contrast to 11th day’s sun set.

On the 11th day it looked like as follows: 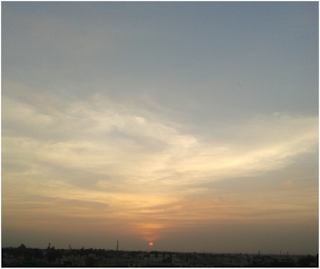 Only when it was sinking, the sun looked red. The sky was purple and not exactly red.

Is NE Monsoon a failure as far as Chennai is concerned? We must wait till next November- December to know. Any way one more day is there. By 3 PM, wind had picked up and the 13th day began with pleasant winds from west and south west. Let us wait for the 13th (and last) day to unfold.

The observation of the 5 factors for day-12 are as follows:

(1) Wind:- Very less. By 3 PM gentle winds were felt. The direction was from South, east and later from West.
Result:-  Less than average feature of Garbottam

(5) Clouds:-  Very less clouds seen in south and western sky for about 3 hours at the start of last quarter of the day.  Otherwise, cloudless on all sides. No glow around the clouds.
Result:- Poor feature of Garbottam.

(2) Atmospheric :- Of the 12 features noted in my blog on Garbottam, nothing significant was noticed. (1) Gentle breeze for very less time. (2) Very few small bunches of clouds spotted for 3 hours only.

(3) Planetary:- (1) Stars appeared insignificant and pale. (2) Except Jupiter all the other planets were in Southern declinations. Planets in northern declinations are desirable. (3) Sun was reddish for a few minutes before sunset.

195th day impact:- Not much rains can be expected though there may be isolated drains in some pockets at the night of 20th July 2016.

The impact on the corresponding fortnight (19thNovember to 2nd December 2016) in my place of observation:- There may be isolated rains in Chennai in the 2nd half of the fortnight.

NE Monsoon:-  The planetary combinations for heavy rains start from 16th November 2016. This combination had Mars, Saturn and Sun in alternating signs. When moon moves in 5th, 7th and 9th signs from them and when such signs happen to be Cancer, Pisces, Taurus and Libra it had rained heavily in the past. It happened at the time of rains in Chennai from mid- November to first week of December 2015.

The corresponding fortnight starts with this combination and moon in cancer. Somewhere in the east coast of India, heavy rain must be lashing the shores. Chennai is not in the line of those rains. At the end of the 12th day, the Garbottam indicates this.

I was travelling from Villupuram to Chennai and could see the huge difference in the clouding pattern when I started and and when I reached Chennai. Based on your observation NEM is not going to be good but planetary combination earlier indicated good NEM isnt it. Which one holds precedence if you can explain it would be good

NEM for Chennai is not going to be good throughout the season. However the 13th day (last day) of Garbottam shows there will be rains in Chennai in the 2nd week of December. Overall NEM presence will be there in the Bay from 27th October and lasts until 16th December. So some part of east India will receive rains. We can not rule out rains in Nagappattinam or Cuddalore regions from NEM. It depends on local Garbottam in those places.

The precedence is given to Mercury- Venus closeness. Whenever that happens reports of rainfall can be heard at some part of the globe. I deduce from this that it would rain where the season is on. When this closeness comes in SWM season we have seen good rains in the west coast and other regions. Two pdf files you have posted in your comment in a recent article in your website on the rainfall in 1975-1990 period in Mumbai (Santa Cruz and Colaba) and Honavar was checked by me for this feature and other ativrishti yoga features. This closeness feature is repeated in almost all cases.

When the closeness repeats in October - December period, I deduce it to be relevant for NEM season. In 2016, it starts from 27th October and lasts till 29th December.

In the immediate future, the closeness between these two planets begin from January 15th 2016 onwards. In these months instead of rainfall, snowfall or extreme chillness can be expected. This may indicate late setting of cold waves and snowfall in the northern latitudes. This upcoming closeness is between 15th January 2016 to 24th March 2016.