The corresponding fortnight will be from 10thOctober 2016 to 23rd October 2016.
10th October 2016 begins with deficit rainfall yogas or anavrishti yogas.

(1) Mars will be in Pooradam, the star that is crucial for water. And Mars, the fiery planet is in the lead with all the other planets towing behind it.

(3) There is no closeness between Mercury and Venus.

These show a dry spell or a retreat of Monsoon.

However there are some interesting combinations also at this time.

They are
(1) Mercury and Jupiter are conjunct which is a good rainfall yoga.

(2) Mercury has become combust as it comes within 14 degrees from the Sun. Mercury or Venus in combustion must give rainfall.

(3) In a couple of days after 10th October, Mercury will be directly behind the Sun while Venus continues to be in front of the Sun. Usually this line-up when it happens with Mercury and Venus within 30 degree span would be associated with good rainfall.  At this time in October, the Closeness between the two (Budha – Shukra sameepyam) is not there. So we have to see how this line-up works.

As Mars is in the lead with other planets behind it, there will be a tug of war like struggle between ativrishti and anavrishti rainfall yogas.

A logical conclusion from this will be that the SW Monsoon would have been almost over in most places. There will however be some places where rainfall will be occurring if Garbottam is helpful in those places. The 9th day of Garbottam will indicate whether such a rainfall trend will happen in Chennai and my place of observation.

The observation of the 5 factors for day-9 are as follows:

(1) Wind:- The previous day (8th day) ended with good breeze and pleasant twilight. The winds continued for some time. On the day time of 9th day (that is on 7th January) occasional pleasant winds continued after 10 AM. The winds were not as high as on the 8th day but very gentle.  The direction was from North east.
Result:- This is more than average factor for rainfall in the corresponding period as far as wind factor is concerned.

(5) Clouds:-  The sky became clear at night (first half of 9th day). The morning twilight saw pinkish streaks of clouds formed as rows of small bunches of flowers. After a brief lull, whitish clouds were seen floating across the sky from North and North east while blue tinted clouds were occupying all around the horizon. I spotted a duck like cloud at around 9 AM. 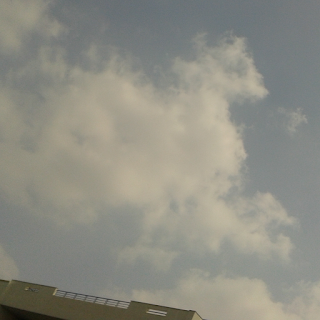 Clouds were abundant especially from 10 AM onwards. They were mostly Culumus clouds.  By noon these clouds grew everywhere with their edges shining like a halo by Sun’s rays. 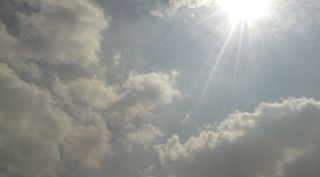 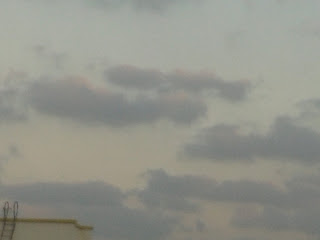 Result:- Cumulus clouds are not features of good Garbottam whereas Cirrus clouds and long streaks of clouds are. The aquatic formation in the morning and evening hours are favourable for rainfall in the early and late night on the 195th day.

(2) Atmospheric :- Of the 12 features noted in my blog on Garbottam, (1) gentle breeze was there, though lesser than on the previous day (8th day). (2) Bulky clouds were there and scorched by the Sun. (3) Aquatic shaped clouds were less for most part, but convex shaped ones resembling fishes were seen in the late afternoon – in the last quarter of the day. (4) Wind direction was from the North and north east. (5) At times Sun was hidden behind clouds. (6) The evening after 4 PM was cool and pleasant (7) Sunset was pleasant and beautiful.

(3) Planetary:- (1) Planets and stars appeared pale. But I did not watch Saturn and Mars all these days. They must be clear and not hazy. If Saturn looks hazy that alone would be a powerful factor to bring famine conditions. But I guess it is not hazy as the atmosphere is clear and the stars are clear. (2) Except Jupiter all the other planets were in Southern declinations. Planets in northern declinations are desirable. (3) Sun was red in colour at the time of sun set. 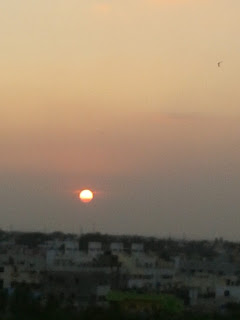 Impact on the corresponding fortnight (10th October to 23rd October):- A short lull in the first half of this fortnight followed by rainfall in the 2nd half of the fortnight in my place of observation. The intensity will be less than that of the previous fortnight.

SW Monsoon:- As explained in the beginning of this article, contradictory combinations are there during the corresponding fortnight. SW Monsoon would have become weak as combinations for plentiful rainfall are not there. Whatever rainfall yogas are there, they will benefit a few places. From the 8th and 9th day Garbottam in my place of observation, Chennai and parts of Tamilnadu are likely to see rainfall in this fortnight.

In the upcoming fortnights, two dates are important. One is 27th October when the closeness between Mercury and Venus begins again that will last till the end of the year 2016. Going by past records, when this begins, it will trigger a season of rainfall. So the NE Monsoon will have to formally begin by October 27th.

The next date is 16th November 2016. From that day onwards, Mars, Saturn and Sun will start transiting in alternate signs until December 11th - the same combination that had given copious rains to Chennai in November – December 2015 and also in the past (discussed in 7th day of Garbottam).

However there is a hitch as Venus will be close to Saturn within 1 degree from 12 Noon tomorrow (8th January 2016) till 7 AM on 10th January.

This means Venus, an important planet for rainfall will be defeated in planetary war with Saturn.

(1) Saturn in front of Venus gives famine conditions. (2) A Planetary war on a day of Garbottam mars rainfall for several days in the corresponding fortnight.

Already the fortnight (10th October to 23rd October 2016) that is under scrutiny for this 9th day Garbottam has Saturn in front of Venus.

The corresponding date now in the Garbottam period also had Venus behind Saturn and getting defeated by Saturn for nearly 2 days which means 2 fortnights.

Will there be a hiatus in NE Monsoon due to this from 23rd October and 15th November?

This will also be a good learning for us as we will know how the counter-acting astrological features must be judged.