The rainfall observation of Garbottam is not just confined to 13 or 14 days in Margazhi when the Sun passes through Pooradam star. It continues on a daily basis till the month of Vaikasi. The Garbottam on the days of Pooradam- transit by the Sun gives broad outline of the rainfall for 6 months starting from June next, on a fortnightly basis. However the daily features also must be noted to see the impact on rainfall after 195 days counted from the day.

As such, the observation of Garbottam continues after the Pooradam-transit of the Sun that ended on 11th January 2016. Interestingly the sky turned wonderful on 13th January with Garbottam features that were not seen on the 13 days of Pooradam Garbottam period.

By 1 PM the sky became active with cloud formations building up. Some fish shapes were seen in the clouds. The Sun also was crossed by clouds that looked glossy. 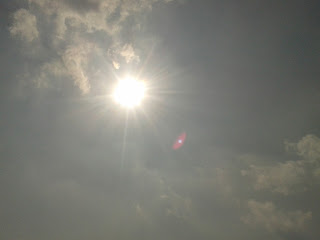 By 3 PM the entire sky was filled clouds of bluish tint - most of them seen in long streaks. The sunlight was gone with Sun continuously covered by clouds. And all along good breeze was blowing from North and north east. This continued till sun set when the western sky turned red though sun-set could not be seen. The sequence of observations are shown below. 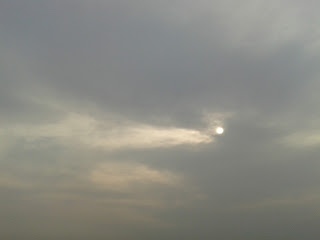 Sun looked like a white ball with clouds covering it. Look at the long streaks of cloud that are fish-like. 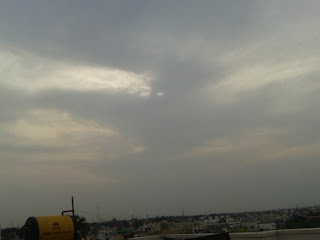 Sun was completely covered. This continued for 3 and a half hours till sunset. 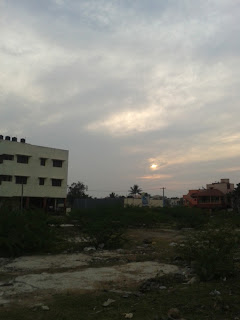 Just before sunset. Sun was like a hazy spot with a halo. Twilight was reddish. The sky continued to be overcast all around. 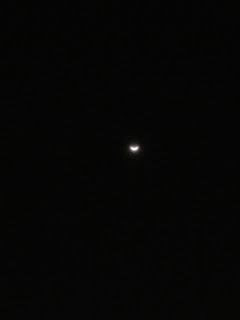 Moon with a halo.
This is the 4th phase of the Moon (naalaam pirai -நாலாம் பிறை )

Here comes the need to check again the next day at the 4th phase. Today (13th January) the 4th phase had both the tips equal. The tips must be equal in the month of Thai for good rains later. The month of Thai is just less than 2 days away from this 4th phase. Therefore the equal tipping is ideal at this part of the month. The equal formation corrects the slight anomaly witnessed yesterday.

Now coming to Garbottam of this day, it was wonderful from 3 PM onwards. As night set in, moon appeared with a halo which is also a good Garbottam feature. So far in the 13 day Garbottam period, no one day featured the kind of appearances seen today. The cloud, the breeze, the overcast sky, sun covered by clouds, reddish sun set and moon with a halo are fantastic combinations that must ensure good rainfall on the 195th day.

Since the Garbottam features were seen in the after noon from 3 PM onwards, the rainfall must happen after 3 AM on 23rd July 2016 and must continue after sun rise. The direction is from South west (as the breeze was from north east on this Garbottam day)

This date (23rd July) falls in the fortnight of 3rd day of Garbottam which starts from 19th July to 2nd August.

Of all the days of Garbottam, the 3rd day showed very good features. The wonderful Garbottam features of this day (13th January) fits with this period of 3rd day Garbottam.

We must wait and see whether the same features continue in the coming days too until the corresponding date for 2nd August. That means upcoming days for a week or 10 days must exhibit good Garbottam features.

The Garbottam features of this day (13th January) looked so vast that most of Chennai must receive rainfall on 23rd July 2016.

Waiting for reality check on July 2016.

This day (13th January 2016) had Moon transiting the star Satabhishak (Sadhayam). According to Brihad Samhita chapter 21, verse 30, if good Garbottam features were seen in the month of Margazhi when Moon is in Satabhishak, it will rain continuously for 8 days starting from the 195th day. That means starting from 23rd July 2016, it must rain for 8 days. Already we found good Garbottam on the 3rd day, for good rainfall in the period between 19th July and 2nd August 2016. By this clause of Brihad Samhita, even if Garbottam features are going to be absent in the coming days, this single day's Garbotttam in Satabhishak will fulfill the rainfall prediction of the 3rd day Garbottam. If this happens, it will be a confirmation of the importance of specific stars.

The list of dates for the coming months when such specific stars will yield good rains will be written in another blog. One must carefully look for Garbottam features on those stars.
Posted by jayasree at 12:15 AM