Megha concept or the “Cloud” concept is one of the basic and simplest concepts of rainfall astrology of the ancient Vedic sages. According to this concept, the cloud formation undergoes a cycle of 9 years. The general level of rainfall or lack of it in a year can be known from the type of cloud that prevails in a year. The formation of 9 different types of clouds follows a pattern and repeats every 9 years. Though the progenitor of this concept is not known, this concept is part of predictive tools in Panchanga (almanacs) for the quantum of rainfall and famine conditions. One of the texts that mentions the names of some of these clouds is Meghaduta of Kalidasa.

Though I have written about these clouds in some of my earlier articles, what prompted me to write about them here is a tweet by astronaut Scott Kelly from International Space Station on 18th November 2015. He posted a stunning picture of the earth blanketed by clouds and expressed his awe at the spectacle. That was the time rains picked up in Chennai and continued relentlessly only to make a record of heavy rainfall of the century. 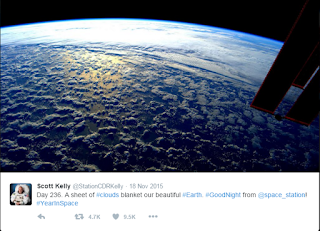 This tweet sounded like he witnessed the entire earth covered with clouds all around. I saved this tweet along with the news report, wondering whether this cloud cover has any link to the Megha of year 2015.

The Megha or cloud of 2015-16 (the year is based on Hindu New year starting in Chithrai and ending in Panguni – from Mid April to next Mid April) is VaaruNa Megha – the cloud of the oceans. It is supposed to give heavy rains from clouds formed in the South west.

A quick reading of the 9 clouds and the years of these clouds are given below to understand the subsequent ideas that I am going to write.

4.      Neela megha  (நீல மேகம்) – mixed trend. Rains heavily at one place but fails in another place.

Three rounds of years for these clouds are shown in the table below.

The present year 2015- 16 has VaaruNa Megha. It had given heavy rains to Tamilnadu during the time astronaut Kelly had observed the cloud cover around the earth. Rains are continuing in the southern hemisphere at present. Does VaaruNa Megha cause precipitation induced basically by the oceans. Though oceans always play a big role in precipitation and cloud formation, why the cloud of this particular year has been given the name VaaruNa Megha?

With this question nagging me at the back of my mind ever since I saw the cloud picture of Scott Kelly, I was searching for weather analysis reports for November 2015 and landed at this site of the USA. It says that there was record warmth in the major ocean basins. The list almost covers all the oceans of the earth. It says,

“In other major ocean basins, parts of the western North Atlantic, the Barents Sea in the Arctic, and much of the Indian Ocean were record warm. The Indian Ocean dipole (IOD) Index has been positive since early 2014 and appears to have peaked in early (Southern Hemisphere) spring as the strongest positive IOD since 2006. The Index declined sharply in November, though still remained positive.”

It gives an important information on Indian Ocean Dipole (IOD) as being positive in 2015 and also in 2006. This is amazing as both 2006 and 2015 are VaaruNa Megha years. The earlier year of VaaruNa Megha was 1997-98 and that year also saw significant IOD according the Wikipedia article on IOD! This article says,

“A positive phase sees greater-than-average sea-surface temperatures and greater precipitation in the western Indian Ocean region, with a corresponding cooling of waters in the eastern Indian Ocean.”

The VaaruNa Megha is characterised as emerging from the south west. The positive IOD coincides with warmer Indian Ocean in the western part of it giving rise to higher precipitation to Indian sub-continent.

There had been an overall hike in temperature globally for the month of November in 2015. This had contributed to the “Blanket” of cloud around the earth as seen from the ISS by Kelly. 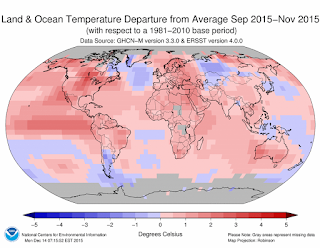 previous VaaruNa Megha occurred in 1988-89. This page on All India rainfall says that 1988 was a year of floods. The IOD value of 1988 is not known.(The concept of IOD was formed only in 1999).  But what is known from the wiki article on IOD is that the phenomenon of IOD had existed since Holocene.

This information is crucial for me as it lends credence to the long history of observational astrology of rainfall. The oscillating IOD had been observed by the ancient seers who had also observed (hitherto unknown) 8 other phenomena of the cloud formation and encapsulated them into 9 Megha concept.

As per this concept, the next occurrence of VaaruNa Megha will be in 2024-25. Time will tell whether the Indian Ocean will keep its date with positive IOD in that year.


Update based on the IOD data given in the link shared by Mr Srikanth in the comment section.
I noted down the years with positive IOD given until the year 1999 and highlighted them in yellow in the table below for easy reference to the type of Megha and the rainfall indicated by that. The highlight in green refers to the positive IOD years given in the Wiki article on IOD.

Years 1970-71 and 1979-80 did not have positive IOD despite being VaaruNa Megha years. So I checked it for the planetary combinations. It was a failure combination with Mars and Saturn playing spoilsport with Budha – Shukra Sameepyam and there was absence of rainfall yogas (Ativrishti)

The other surprise is 1967-68 and 1994-95. They were the years of Avartha Megha that is associated with scanty rainfall. When I searched the web for Monsoon season of 1994-95, I came across this article on anomaly in 1994 monsoon. There were sudden good rains in the Northwest of India during the SW season which was not predicted in any meteorological model. This view concurs with Avartha Megha. But it had rained more than normal in July and between June and August. When I checked the planetary combinations, I found the presence of the foremost ativrishti yoga of Saturn, Mars and Sun in alternate signs at that time. This combination existed when Chennai was lashed with rains. This combination existed whenever heavy rains occurred.

Therefore the inference from the above is that Vaaruna Megha has a success rate of 70%  in giving good rains (5/7 times in the last 63 years, it had given good rains). In the absence of any rainfall yoga (planetary combinations), VaaruNa Megha fails to give good rains.

Tamo Megha, Neela Megha, Kala Megha and Drona Megha had been successful as they are associated with good rainfall. If the IOD values are positive and the current Megha is any one of these or Vaaruna Megha, it would ensure good rains.

Avartha Megha giving rains is a surprise. But in the last 3 decades, Avartha Megha was not associated with positive IOD. In the years when it had given good rains, planetary combinations were good at the time of arrival of monsoon.

Interesting you are connecting the IOD with the Megha, good read Maam. You can get past IOD readings here http://www.jamstec.go.jp/frcgc/research/d1/iod/dmi_nature.index these are basically recreated values based on the sea surface temperatures

(1) Megha or Ghana indicates number 17. There is a plane Crystallography theorem in Modern Algebra (eg. Algebra by Michel Artin, Prentice Hall, Page 175). By repeating a pattern several times a plane can be completely covered in 17 ways or designs. This is like a cloud covering a plane.

(2) Original spread matter of universe in water of different grades-Rasa, Sarir or Salila, Ap, Ambha, Mara, Jala etc. Created compact matter within a boundary is Earth (Prithivi). Intermediate formative stage is mixture of 2-earth & water. So it is called Megha (cloud formed as mixture of vapour, air, or Dhuma-jyoti-Salil-Marut in Meghaduta) or Varaha (boar, amphibian animal of land & water). For 9 sargas (creation cycles), there are 9 times scales described in Surya-Siddhanta. Bhagavata purana counts original abstract matter called Rasa also making it 10 sargas. In each Sarga, formative stages are clouds-making a total of 9 clouds.

Here also, you have counted 9 clouds in a different way-they are annual variations in cycle of 9 years.