Is it right to ‘arrest’ a goat for grazing in another man’s land?

A recent news report said that a goat was arrested for repeatedly entering the garden of a Judge in Janakpur in Chhattisgarh and eating out the vegetables and flowers there. The goat was accused as a “repeat offender” as it entered the garden regularly despite being chased away and was finally ‘arrested’ following a complaint. Later it was let out but its owner was arrested after repeat warnings to him to not allow his goat venture into the garden. 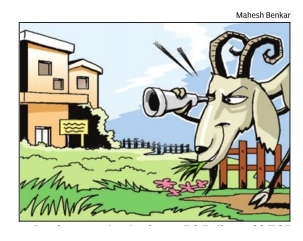 Though this news item sounds bizarre, what makes it newsworthy is that the goat was arrested or rather was taken into custody. The complaint and subsequent action by the police may attract criticism, but this news item reminded me of some similar instances in the past.

Grazing one’s animals in another man’s territory was never tolerated in the past. The owner of the animals has to bear the responsibility for the trespass and the damage caused by the animal. I don’t know whether any legal precedence is there in Indian courts, but there are inscriptions to indicate that the owner had to bear the responsibility. Taking custody of the animal was to bring the owner around and make him accountable for the damage caused by the animal.

Such trespasses have even caused extreme enmity as there is an inscription on the punishment meted out to two persons who killed the cattle-herd of the buffaloes which destroyed their crops. The damage to the crops had happened. But from whom the compensation can be got? Since the poor cattle-herd who either slept away while his cattle had crazed the farm or was incapable of controlling his cattle could not be expected to pay compensation, the owners had taken the law in their hand and had killed him in a rage.

This issue was debated by the local administration which finally decided to award a punishment of supplying oil for lighting lamps on all days in the local temple. This may not be considered as a punishment in today’s conditions, but in those days, procuring oil for lighting non-stop lamps in temples was a costly task. The mills have to be established, sesame has to be procured and crushed in the mills to get oil for lamps. Another reason for this kind of punishment was to pave way for “parihara” or propitiation from the heinous crime of murder. The belief was that by keeping the temple lit throughout day and night on all days, one can wash oneself off the worst sins. This kind of ‘punishment’ was prevalent during Pallava period.

Generally for causing death under unusual and unplanned circumstances, lighting non-stop lamp in the temples was ordained. During the period of King Kulotthunga –III, there was an instance of a person who went on hunting, making a wrong shot that a hit a man and killed him. He was also asked to light non-stop lamps in a temple. In these cases, the offenders must have been made to compensate for the loss of life, but since these instances were taken from temple inscriptions, only the lighting of lamp part is found mentioned.

A similar incident in the life of King Dashartha  (in having killed Shravan mistaking him for an animal) brought him a  punishment of losing his son and dying of pain at the loss. So the actual punishment will be in proportion to the suffering caused to the other. To lessen the intensity of retributive suffering, one was ordained to light the temple. The reduction in retribution can happen in such cases only if the offender repents for his act. 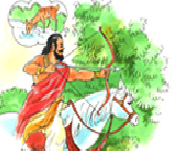 In this connection let me share a peculiar narration we come across in the commentary to a sutra in Tholkappiyam. (Echaviyal, sutra 449 - தொன்னெறி1 மொழிவயின் ஆ அ குநவும்). It is about an old saying “` யாற்றுட் செத்த எருமையை ஈர்த்தல ஊர்க்குயவர்க்குக்கடன்” meaning, that it is the potter’s duty to cremate the buffalos that are washed ashore by the river. The rationale of this can be understood by the background story.

Once a trader bought some buffalos from the money he made and was coming back home. On the way he saw a river and took some rest on its side while his buffaloes were cooling themselves in the waters. At that time a sudden flood surged into the river caused by rainfall at some other place that fetched copious waters into the river. The buffaloes were pulled by the flood waters and were washed ashore in a distant village after a few days. The stench from the dead animals was too high, that no one from the village was ready to remove the carcass. So the village community assembled to decide what to do. The “Kanakkan” who maintains the old records was asked to check the old records to see whether any similar instances had happened in the past and how such instances were solved.

The record keeper had a grudge against the potters of that village and so decided to take a revenge on them. He included a leaf in the bundle with a narration of a similar incident saying that under such circumstances, only the potters must clear the carcass and cremate them, as the sudden and untimely floods were caused by the soot and smoke of the kiln they were working with! The narration goes as follows:

Reading this leaf, the villagers were convinced and asked the potters to cremate the dead buffaloes. What punishment awaits the cunning record keeper is another issue, but what makes this narration interesting is the logic behind putting the onus on a person for an alleged link to an issue. The sudden and untimely rainfall was attributed to the work in the kiln of the potters and therefore the potters were held responsible for any eventuality arising from that sudden rainfall.

This narration is given as an explanation for the sutra of Tholkappiyam which says that a time held idea can be used to understand an unusual idea or occurrence. Why a sudden rainfall occurred was justified by a time-held idea. But what we have to see in the context of this article is that how people zeroed in on someone as being responsible for a problem. Though the death of cattle in flash floods can be taken as an accident, where only Nature can be held responsible, here the people had seen logic in who or what caused the sudden rains in the first place. This is also an accepted logic among the people in those days.

If we start applying such logic in the numerous events happening in our lives and around us, there is no end to the blame game. But is Karma theory such a lax idea as to spare us?

Goat arrested for trespassing on judge's garden
﻿
﻿
In a bizarre incident, Chhattisgarh police on Monday took into custody a goat after a complaint that it ventured into a judge's garden in Janakpur block in Korea district, 250 km from here. The goat, which was accused of being a `repeat offender', was released later, but its owner was not so lucky.
Abdul Hasan (40) was arrested and sent to jail on Tuesday on charges of trespass and damaging property, the police said. “My goat scaled the boundary wall again and ate flowers and vegetables in the garden. It was taken to the police station and then police brought me in as well”,  said Hasan.

Police said the accused had been ignoring warnings given to him for over a week and was eventually detained and charged under Sections 447 (trespass), 427 (damaging and destroying property of others) and 151 (creating public nuisance) Indian Penal Code on Monday . He was produced in court on Tuesday and sent to jail. Janakpur station in-charge RS Paikra told TOI that Hasan had been letting loose his goat into the garden of magistrate S E Ratre for more than a week. He would do so after the magistrate left for office, the officer said. Ratre's gardener, Rajesh Paikra, tried to stop Hasan but his efforts went in vain and he then informed police.

Local Congress leader Shailesh Nitin Trivedi slammed the police for the incident, saying, “The arrest of a goat is ridiculous. Chhattisgarh police have made fun of themselves by doing so. Those accused in rape cases are moving freely .“ “The most painful and disappointing aspect is the entry made by an ASI of Chhattisgarh police in the diary that `the goat would graze on the garden, despite warnings'. Chhattisgarh police is communicating with goats!“ he added.

Last year, a parrot in Chandrapur in Maharashtra was detained after an old woman filed a complaint against it for making obscene remarks. The parrot, named Hariyal, was allegedly trained for two years by its owner, Suresh Sakharkar, to abuse his stepmother, Janabai.

In a similar case, cops locked up a pigeon in Manwal village in Punjab last year on suspicion of it being a Pakistani spy . It was listed as a `suspected spy' because of a note in Urdu tied to its foot.