The Gujarat Government has stipulated life-imprisonment for slaughtering cow in its recent amendment to Animal Preservation Bill. It has also made the offence non-bailable. Lot of dust may be raised over this amendment, but what I intend to write here is that in THIS COUNTRY killing a cow was considered as inviting a greater retribution than just imprisonment in the current life.

Cow was considered as wealth in this country. Infact wealth was measured in the number of cows, but killing them amounts to blow to Dharma. When Dharma is on the decline, the cow is personified as having lost a leg. In the present Kali yuga the cow is said to have 3 legs broken and is limping on only one leg. In such a dire situation, the one who protects the cow sheds off his paapa karma.

Killing a cow was something unthinkable even a few decades ago. Every native citizen of this country, even if he is a Muslim or Christian had come down in the lineage of people who thought that killing a cow is similar to killing one’s mother or father. It was considered as the worst crime. In the olden inscriptions on donations to temples, the last line used to read like this :- “the one who stops or spoils or usurps this donation must suffer the karmic effect that accrues to one who had killed a cow or his father or mother.”  This shows that cow-slaughter attracts the worst karmic effect for the slaughterer.

It was mainly on the issue of cow slaughter that untouchability began. People kept a distance of 64 feet from the one who had killed a cow. Even if someone had killed a cow by accident, he had to go to the Ganges to do purifying ceremonies. Until then he had carry a stick tied to cow’s tail to show the offence he had done. No one would have any truck with him until he finishes the purifying acts.  This is for the one had unintentionally killed a cow.

Intentional killing of cow attracts retribution in the form of suffering in many future births. This is not just a religious thought or confined to Hindu religion. This is a rational idea of what one does comes back to one. In this Universe everything happens in a cause and effect cycle. Killing a life that is not a threat to one but which gives life –growing food to one, would definitely attract retributive effect. Let me list some of them here.

·       The person who regularly kills cows would be born as a cow repeatedly only to be killed again and again.

·       Intentional killing of any animal would make the person suffer from septic wounds in his body. He will develop ulcerous swellings in his body called Vrana roga. In today’s parlance this is known as cancer.

·       Slaughterer of cow will be born with incurable skin diseases according to Karma Vipaka. Infact Karma Vipaka says injury to the cow and not killing, as it was unthinkable to kill a cow in our country.

·       One of the karmic causes of leprosy is killing of any living creature.

These karmic effects are irremediable. Only when a person keeps the cow on par with his mother, can he rationalise why he should not kill the cow. Any harm done to any creature begets harm in return. Harm done to cow begets the harm that is equal to the harm done to one’s mother. This rationale must be inculcated in every person right from childhood. 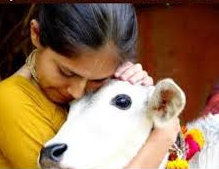