Even as lakhs of devotees are enjoying the annual Rath yathra of Lord Jagannath of Puri, my mind keeps wandering on the verses of Silappadhikara, Mahabharatha  and Brihad samhitha that seem to contain a hidden story behind the Puri deities and a probable connection between two groups of people – one at Puri and another at Madurai in Tamilnadu whose ancestors had a connection with the Krishna – siblings in Dwaraka or Mathura. Let me explain how. 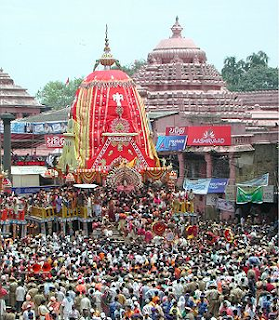 The deities of Puri are Krishna as Jagannatha, his elder brother Balarama (Baladeva) and younger sister Subhadra. Though worship of these three is not found today except in Puri, the description on how to carve the images of these deities for worship appearing in Brihad Samhitha goes to show that worshiping these three deities together had been there before 2000 years ago. 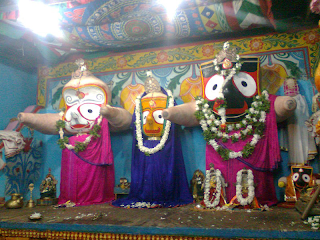 The positioning of the Krishna siblings with Subhadhra in between is indicative of a dance they used to do along with their friends in the cow shed in Gokulam. Such a dance is depicted in Bala charitha of Bhasa, I presume. Because there is a verse in Silappadhikaram, in which the Yadava woman Mathari, recalls the dance in Bhalacharitha in Ayarpadi, which was done by Krishna and Balarama with Subhadra in between. She also says that Krishna used to dance like that whenever there were ill omens and when the surroundings presented a gloomy picture. When Krishna began to dance, the entire situation would change and every one would feel happy. 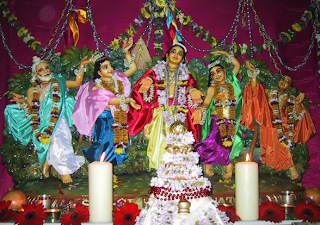 So saying Mathari called out the children in the neighborhood and they all began to dance. That dance is the famous ‘Aaycchiyar Kuravai” a part of it has been immortalized by Mrs MS Subbhulakshmi in her stirring voice.
Silappadhikaram explains how this dance was done. It makes us think that this was how Krishna also danced in Gokulam. Silappadhikaram was written 1800 years ago and therefore it is possible to believe that the olden tradition of Bala charitha dance of Krishna was preserved at that time. This particular chapter is worthy of research by dancers.
This particular dance has 7 girls forming some pattern. The seven girls represent the seven swaras of music.
Of them the shadjam (sa) was represented by Krishna.
The Panchamam (pa) was represented by Balarama.
Subhadra always represented Rishabham (ri) and therefore would be moving close to Krishna and always seen in between Krishna and Balarama (sa and pa).
The singers would sing ragas and songs. The dancers, each representing the swaras would move in accordance with the swaras of the songs. There are others who would jump in and jump out. I think they represent the variations in swaras (like sadharan gandhara or anthara gandhara). One can guess the raga from the formation of pattern by the dancers. It is very fascinating to read the description of that dance in Silappadhikaram.
The intriguing part of it is how the cowherds settled in the outskirts of Madurai in Tamilnadu, were aware of the childhood dances of Krishna who lived some 2500 years before that time.
The answer for this lies in the migration of a group of people from Dwaraka, about which I have written many articles before. Dr SN Rao’s exploration at Bet Dwaraka pointing to a submergence about 3500 years ago holds the key for the movement of people from Dwaraka (and Indus sites near that) not only to Tamilnadu but also to Orissa. The Balacharitha tradition of dances must have been retained by the post Mahabharata followers of Krishna. Though a majority of the people of Dwaraka had left soon after Krishna’s exit (when Dwaraka was inundated), a part of them had returned and reclaimed Dwaraka. They had settled there and continued with the memories of Krishna, Balarama and Subhadra. 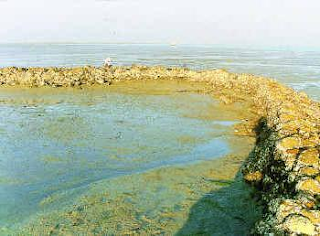 Again tragedy struck them in the form of a fresh flood which struck at around 1500 BC. From Tamil texts it is known that a part of them had been brought to Tamilnadu by sage Agasthya. The Tamil source even suggests that some of them were the descendants of Drushtadhyumna. It is these people who brought the worship of Baladeva and the dances of the three siblings to Tamil lands.
There must have been another group of the same region of Dwaraka, that had left for Puri after the deluge at Bet Dwarka. They had carried the same memory of Krishna, Baladeva and Subhadra to Puri. We have some theories on the origins of Puri deity worship, but we cannot ignore the similarity between the tradition that had lived in these two regions (Madurai and Puri). A tradition of post Mahabharata worship had lived on in a song and dance form in Madurai whereas it was manifested as a formal worship in Puri. This worship must have existed in other regions too (such as Mathura) because we have rules of Shilpa sastra saying how to carve out the deities of this group. But what made these two regions to cling on to the three deities could perhaps be traced to a common beginnings in Dwarka for the people of Madurai -yadavas and those settled in Puri.
I say this because of the particular name “Indradhyumna” connected to the Rath yathra at Puri. The divine siblings make this Rath yathra mainly to pay a visit to their Aunt’s house. The name of the aunt given as “Indradhyumna” sounds similar to Dhrishtadhyumna and rings some familiarity with another connection to Orissa (Kalinga of olden days).
In the Mahabharatha war, the Kalinga king sided with Duryodhana because Duryodhana was his son in law.  The Kalingas fought fiercely with Bheema which saw Dhrishtadhyumna rushing to Bheema’s help. Dhrishtadhyumna fought valiantly and defeated the Kalingas. (MB -6-54). Perhaps after the war, the descendants of Dhrushtadhyumna were given the rulership of Kalinga.
There is yet another reference to Kalinga – here connected to Krishna. Yudhishtra praises Krishna as the Lord who in the form of a Tiger was worshiped in the Kalingas (MB 13-17). So Krishna worship and Dhrsuhtadhyumna’s connection were there right from Mahabharata times. The name of the aunt as Indradhyumna sounds similar to Dhrishtadhyumna and it is probable that some close relative of Dhrishtadhyumna who was in the status of an aunt of Subhadhra was wedded to a king of Kalinga. When deluge took away the reclaimed land of Dwaraka in BC 1500, a group of Dwarakans might have left for the already known place in Kalinga territory (Orissa / Puri). With them the worship of the three siblings might have travelled.
Those who had gone to Orissa might have been royals or those related to Indradhyumna. Commoners also might have gone with them. But those who had travelled to Tamilnadu included for sure the cowherds – along with royals and others. These cowherds had retained the memory at the cow sheds in Gokulam and also the leelas of Krishna. Perhaps a genetic study of Madurai based Yadavas and people of Orissa traditionally connected with the Puri temple might throw up some hints to support this view.
Related posts:-
Dhrishtadyumna, the probable ancestor of the VeL kings. (World Tamil Conference series 11)
http://www.tamilhindu.com/2009/12/who-is-nappinnai/
Posted by Jayasree Saranathan Ph.D at 7:52 PM