The month of Margazhi is known for the unique Vratham, The Vaikunta
Ekadasi vratham.
A question comes in our mind whether any indication of this ekadasi had found mention in Thiruppavai.
This piece is to unravel this secret.

Vaikunta ekadasi is the day of cosmic significance- that of the earth coming in line with the
galactic centre, Sagittarius (Dhanur rasi) and the cosmic centre. In
other words, on this day, the earth will be at the outer most point
from the centre of our galaxy and the nearest point to the outer space
from where we, the entire systen of ours evolved and is moving
outward.

Looking at the past records, this day marks turbulance, eruptions and tsunamis.
This day marks the birth of the previous manvanthra, the chakshus manvanthra.
This manvanthra is marked with the very important of Lord's flight on
His vahana to save the Gajendran, or rather to destroy his enemy!
This day thus marks the Lord's flight / travel on Gruda vahana with
all his divya aayudhas.
When He does not come to destroy someone, He destroys something on the
surface of this earth.

Look at the records of earthquakes and massive tsunamis. 6 degress
before and after the Vaikunta ekadasi part on the sky has some
tale of destruction - a kind of Lord's commitment for "dushta
nigraham".

Coming to think of this,  the Lord on Garuda with all
his divya aayudhas is what Periyazhwar saw.
The azhwar wondered how this divya vasthu mounted on Garuda and
surrounded by nithya sooris and seen by them always is seen here on
this earth in this age of kali.
We are told that the aazhwar grew worried that no harm should happen
to this vasthu that is seen in its divya roopam.
That is why he did mangala sasanam wishing Him pallaandu.

But some questions arise here.

This divya vasthu with divya ayudhas has been cited.
If the Lord is seen in such a form, it means He has come on some
agenda of dushta nigraham. Please note the aazhwar wonders what It has
to do in this age of kali.
Whom to protect, has He come to destroy the dushtaas?

He has come with full attire of destroying enemies. But the people
here are all rajasic and tamasic manushyas held by the spell of Kali.
Let them be spared, for, they dont need a destroyer - they only need a
protector who can protect them from their innumerable karma.

It is logical to think that the aazhwar must have glorified Him in
terms which humans are incapable of wishing Him, only to appease Him
so that He does no harm to those here.

The aazhwar's purpose seems to be to pacify the Lord seen in full
armour, seeking Him to protect us with His divyaayudhas rather than
using them to destroy us.

An analysis of Pallandu -10 also reveals this.
There are only 2 lines of thinking throughout pallandu-10 -
(1) Wishing Him pallandu seen in some battle-victory,
(2) surrender to Him or 'reminding' Him that he is His servant

The same divya roopam comes out on Vaikunta Ekadasi.(VE)
That it is a ugra roopam can be understood by what happened in Thirumala.
In olden days, Malayappan was taken out in VE procession in morning /.
The foggy climate of the hill in margazhi was one reason.
But it was seen that the surroundings caught fire suddenly on those occasions.
So it was understood that the Lord becomes Ugram on that day in that attire.
That is why He was taken out in procession during early morning.

Even today, the sellers at Thirumala would not dare to charge
a paisa extra for their products on VE day, for,
they are afraid that they would be punished for cheating,
when 'Ugra Srinivasan' takes out a procession
on garuda on VE day.

This also reinforces the view that the Lord with panchayudhas
as depicted in last sloka of 1000 names of Sahasra nama,
reminds one of His Dushta nigraha-shishta paripaalana pledge,
that He will protect the righteous ones
and destroy the non-righteous ones
by His divyaayudhaas.

He is seen with vanamaalee as though returning from a battle victory,
seen with all His panchayudhas, His sarva praharaNaayudhas.
What for we are seeing Him like this?
To destroy whom?
Definitely not us,
So taking shelter in HIm 'abhirakshathu'
By this pleading,
let He as Vishnu, Vasudevan and Srimaan NArayanan protect us!

This divya roopam with ayudhas has to be worshipped with pallandu.

This is what Andal tells in Maale manivanna, the 26th pasuram!

If we assume that each pasuram of Thiruppavai
was conceived on each day progressively,
the 26th day seems to be the day of
Vaikunta Ekadasi when Andal
sang MaalE Manivanna pasuram.

Let us explore how.

The first day is obviously a pournami day.
Mathi nirainda nanaaL.
counting the days,
Naayaganai, the 16 th pasuram must have been on amavasya day.
The opening of the door coincides with the start of Shukla paksham.
Further on, looking at the contents of the pasurams,
the Shukla paksha Ekadasi which is Vaikunta Ekadasi seems to have
occurred on MaalE manivanna,
not on Koodarai, which tells about eating 'paal sOru'

And there are many clues for VE on Maale manivanna.

The vyakhyanams tell us about Andal justifying her Nonbu,
in that, she has not done anything which was not done by 'mElaiyaar'
It is shishtaacharam,
that which is being practiced from ancient times.
This nonbu can be traced to mimasska, vasanthothsavam etc.

But a question comes why should Andal, after 25 days of nonbu,
worry about giving a justification -like -talk on mElaiyaar seivanagaL.
She has had no doubts whether this nonbu has shastric / agamic acceptance.
If she has had, she would have said about this in the initial pasurams.

And then, her nonbu did not stop with Maargazhi.
She continues in Thai, but this time on Manmathan!
What shatric / shishtaacharam she had for this 'Thaiyoru thingaL'
Where is the vedantic precedence for this nonbu?
What justification
has she given for this nonbu in Thai?
Nothing.

And her way of worship had been unique.
It is what elders call as
paragada sweekaaram.
She did not go after the Lord.
She made the Lord come after her.
She followed unique ways, not followed by any in the past.

But there is every chance that it is about the Vaikunta Ekadasi vratham
that had been in vogue - something done by mElayaar -
probably from Chakshus manvanthram.

Becasue the very next lines support this.

He is here to shake this earth..

When does He blow it?

Only when He goes out to destroy, doesnt He?

Further on, his shankam is talked about.
So He is coming to shake the earth with His aayudhaas.

Andal and her freinds are obviously seeing the Lord in Garuda sevai
on the street.

What to do now?

'Tap your parai just as how my father (periyaazhwar)
shook the bells on the elephant's neck,
on which he was riding,
when the Lord was
cited in Garuda vahana as sarvaayudha-paaNi.
And sing 'Pallaandu'
'pallandisaipparE'" 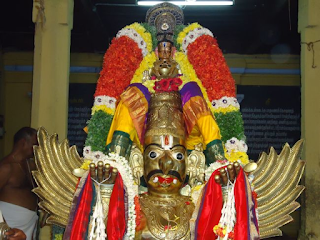 The KuraL says "arai parai anna".
It is said that parai was beaten in those days
while publicly letting out secrets.
Mostly these secrets are the hidden meanings of Vedas.

All these are part of the procession.

All this is happening on this day of our nonbu,
as a practice of 'mElaiyaar'


Here another kind of interpretation is also possible.

Andal with her friends are busy with their nonbu - a girl's way of prayer.

But elders, those is Mela-th-theru, in mela veedhi are busy with their
perumal. They have their difficult vrathams,
difficult ways of worship
- not like ours which is like a picnic to river bank,
making dolls out of river mud,
garlanding that doll and tapping our only musical
instrument, the parai.

But today we had a look at what those mElaiyaar do, their vratham.
So it is apt for us too to tap our parai and join the pallandu - isai.


PourNami on the last day too.

Taking this further, it is now seen that the last pasuram,
'vanga-k-kadal' also saw a pournami, the 2nd pournami of the month.

The successful completion of the nonbu is indicated in the reflection
of Full moon on the face of seyizhaiyaar.


But her nOnbu continues in Thai too.
While the Maargazhi nOnbu has been a regular nOnbu,
a question comes to our mind,
why Andal continued her vratham in Thai too.

This question is necessitated by the observation
that 2 Pournamis in one month makes it a 'Mala maasam'.
Did Andal nurture any reservation
about the success of her nOnbu in mala maasam?
Is that why she did another nOnbu in Thai?

I may be deadly wrong, but lemme share what I feel abt VE. In olden days the tamils (almost all indians) followed Chaandramaana Panjaangaa ie Lunar Calendar. So the next day of new moon (Prathamaa) the month begins; on 10th day the paasuram reads, "நோற்றுச்சுவர்க்கம் புகுகின்ற அம்மனாய்....". This bears significance as the next day being Vaikunta Ekaadashi. So I conclude that there are clear indications of fasting on the 10th day entering Swarga or Swarga Vaasal the next day.

@ Rayar,
VE comes in waxing phase of the moon. Thiruppaavai opens with Full moon description - as is the case with Paavai nonbu - and therefore நோற்றுச்சுவர்க்கம் denotes 10th day of waning phase. So that can not signify VE. Moreover VE vratha is on the 11th day and not on 10th day.

Tamils followed Luni- solar calender and there are Panchang verses to prove this.

Lovely theories on the Secrets of Thiruppavai. enjoyed reading it very much, thanks heaps.