Yugadhi & Vishu – The New years at their appointed times!

It is time again to think about the New years
-the chaithra New year (Yugadhi) and
the Chithra varusha pirappu that is to come in a few days. 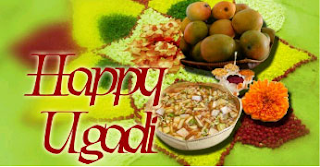 Fortunately for us,
Rajasekhara Reddy is less aware of sky-high powers,
unlike his counter-part (Karunanidhi) in Tamil nadu
and Yugadhi is passing off silently, yet gloriously.

We have to wait and see what Karunanidhi is going to say
on / about Chithra varusha-p-pirappu,
which Tamils are anyway going to celebrate as their New year.
The unprecedented crowd at the Kalyana uthsawam of
Thirupathi Venkatachalapthy at Island grounds in Chennai
- a crowd that came on its own volition –
makes one feel assured that mortals like Karunanidhi are after all mortals and
their ramblings are nothing but the cries of the ignorant.
Come whatever they say, the Vishu is going to come at the appointed time.


The New year comes and goes with its deep-rooted meanings

and I thought I can share what I know.

Ancient Vediks used a combined Luni- solar calendar.
Their yuga consisted of 5 years of luni-solar years known as
“Pancha varshathmaka yuga” which had
an ascending and a descending phase of two rounds of lunar years
coinciding with solar years.

These five years constituted one Yuga.
The first day of the Yuga and also
the individual year of this Yuga started
on the day after the conjunction of Sun and Moon
before the entry of Sun into Ashwini.
Thus this day is Yuga- adhi- Yugadhi.

These Yugas, originally formed as part of Jupiter cycle
are also about years of the Lunar cycle or Chandramana.
Lunar month is useful for identifying the time
for sacrificial or religious works.
It also serves as a good time keeper.

For instance we know that this day is so known as Kalpaadhi!
The present kalpa, Shwetha varaha kalpa started on this day.
Today is the Kalpa-adhi day

The beginning month of the year is known for many beginnings.
The second day of this lunar month, (shukla paksha dwithiyai)
marks the birth of Krutha yuga.

On the 7th day in this month (shukla paksha sapthami)
Ganga was born.
That day is known as Ganga sapthami.

On the 5th day in Krishna paksha of this month
was born Varaha.

This means the land form was lifted from the waters
on a paksha panchami day in the lunar month of Chaithra.

Thus one of the purposes of calendar in the Sanatanic society was
to accurately record the events.
This method is useful in tracking the past.

While the lunar calendar is used for civil purposes, that is,
for fixing time for doing works for humans,
Solar calendar helps to locate time in cosmic scales.

From Surya siddhantha and many verses from Vedas and Brahmanas,
we come to know that the onset of spring season marked the beginning of the solar year.
This season began on the day of Vernal equinox,
when ecliptic cuts the celestial equator in the northern hemisphere.

The texts speak about
the solar system and the movement of the sun
around the zodiac as Vishwam, or Vishnu
who is present everywhere
and who treads by three steps,
one step at uttarayana and another at dakshinayana while,
his highest step at heavens - at the vernal equinox.
This highest step marks the onset of the new year.

“4-We laud this manly power of him the Mighty One, preserver, inoffensive, bounteous and benign;
His who strode, widely pacing, with three steppings forth over the realms of earth
for freedom and for life.

5 -A mortal man, when he beholds two steps of him who looks upon the light,
is restless with amaze.
But his third step doth no one venture to approach, no, nor the feathered birds of air
who fly with wings.”

The movement of the sun around the zodiac is
said to be the travel of Vishnu in a rounded wheel of 90 x 4 steeds.

“6 -He, like a rounded wheel, hath in swift motion set his ninety racing steeds
together with the four.
Developed, vast in form, with those who sing forth praise,
a youth, no more a child, he cometh to our call.”

Equinox was considered to be the head of the year.
Year was decided in terms of seasons
and the year always started in Spring season (vasanta ritu)

From Rigveda,
(1-104-5 on Vishnu)
“ May I attain to that his well-loved mansion where men devoted to the Gods are happy.
For there springs, close akin to the Wide-Strider, in Visnu's highest footstep.”

It is repeated is Aitareya brhamana (1-2-3)
and Taittriya Brahmana (3-10-4-1)
that the head of the year is spring season and
the front and back parts are the 2 ayanas.

Many Samhitas mention the zodiac as a personification of Kala purusha.
The kala purusha has as his head the constellation Aries that begins with Ashwini stars.

Nowadays even seasons have undergone changes.
The 6 season rotation no longer happens
the way they did in those times.
Hot seasons prevail for most part of the year.

It is only proper not to depend on seasons and
instead consider the entry of the Sun in Ashwini
as the beginning of the year.

The sun’s entry is connected with many auspicious things
in many verses in Rig veda and Brahmanas.

“Like the sun’s progress in a day in Ashwini,
may the deities give us Ayush” so goes a prayer of Rig veda.
Besides long life, the Ashwins are capable of removing the foes,
bringing out germination, granting progeny
and curing all diseases

4 - Bring hither nourishment for us, ye Asvins Twain;
sprinkle us with your whip that drops with honey-dew.
Prolong our days of life, wipe out our trespasses;
destroy our foes, be our companions and our Friends.

5 - Ye store the germ of life in female creatures, ye lay it up within all living beings.
Ye have sent forth, O Asvins passing mighty, the fire, the sovrans of the wood, the waters,

6 - Leeches are ye with medicines to heal us, and charioteers are ye with skill in driving.
Ye Strong, give sway to him who brings oblation
and with his heart pours out his gift before you. )

Aries with Ashwin is known as Chagi and Vishwa Bheshaji
indicating that it overcomes all evils and cures all diseases.

So it is apt to begin the year with the entry of Sun into Aries (Ashwini).