Varun’s mistake is he called himself a Hindu!

To kill a mocking bird Bane of being Hindu

The country’s politics has become minority centric. This facet comes into sharper focus at the time of election because that is the occasion to decide the destiny of the country. Varun Gandhi would have got away unnoticed had he said all that he had allegedly said to protect the Muslims or even a Kasab, Shahabuddin or Mohammad Afzal instead of the Hindus. The issue is not the use of religion in politics but the use of wrong religion on a right occasion. 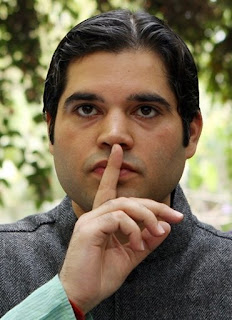 If Sonia Gandhi goes to Tirupati, or Guruvayoor—these temples are not open to non-Hindus and after her visit the temple priests conduct elaborate purification rites—though she is a Catholic it is not for vote but a generous fashion parade of secularism. Look at the Congress manifesto. Or the Trinamool Congress manifesto. Both have chapter and verses of promises for specific religious groups(not Hindu) and by all interpretations the crux of their promise is a separate religious charter exclusively to woo minority vote bank. (This is a clear violation of the Constitution.) Not only that. They are highly patronising to terrorists. The Congress manifesto claims to have defanged the security forces fighting terror by repealing POTA. The Congress manifesto was released on the day twelve brave Indian soldiers lost their lives in fighting the Lashkar infiltrators. The country has lost over 7000 innocent citizens in terror attacks in the last five years as part of the Jehadi design to inflict a thousand cuts to destroy . But the Congress manifesto is silent on fighting terror. Rather it claims terrorists have no religion. Terror patrons in the country are honourable men. They are the torch-bearers of secularism.

The Congress is openly seeking the support of ulemas of Deoband, Jamaat-e-Islami and Maulavis of Bahralvi, Imam of Jama Masjid and Bangladeshi infiltrators on purely communal lines. But neither the Election Commission nor the media accuses it of communal politics. The media does not expose them either. In Mizoram, Nagaland and other North-eastern states, the Congress plays Christian card promising the land of the Bible, but it gets away in the name of secularism. Any number of Bishops have written to the Congress high command demanding tickets for their nominees and many of them were given ticket.

More blatant is the crass minorityism cynically being promoted by the CPI(M), Samajwadi Party, BSP and others. CPM’s closest ally in Kerala is Madani, a religious fanatic whose links with various terrorist incidents in the country is well-known. Another fanatic leader who wants to introduce shariat in the country, Kantapuram Musaliar is a bosom ally who is canvassing for the CPM. All these people are known for their communally charged vitriol.

A report from Uttar Pradesh said the Samajwadi Party and BSP together have fielded nearly fifty candidates with serious criminal record, mostly from the minority community and it is likely as many as two dozen of them would enter Lok Sabha. The Samajwadi Party which defended terrorists from Azamgarh who attacked and insulted the memory of the slain police officer MC Sharma by offering his widow a fake cheque has no qualms about its crass communal politics. All these go scot-free not only because the Constitutional authorities are biased, but also because the political milieu in the country is such that only the word “Hindu” is objectionable and communal.

For people holding Constitutional posts their religion comes first, if they are not Hindu. Vice President A R Ansari recently advocated separate budgetary provision for Muslims. Nobody objected. Perhaps he was not satisfied with Sachar Committee, separate ministry, quota and scholarship for Muslims. But even a “Hindu” tag is detrimental to a person’s political progress. We have seen it at the time of Presidential election when both Shivraj Patil and Dr. Karan Singh were rejected only because they happened to have a Hindu tag. If Varun Gandhi had spoken in the name of any particular caste, then also no charge-sheet would have been filed. After all caste politics also is passé.

Varun is the first Gandhi to declare that he is a proud Hindu. So he is in trouble. Tomorrow if he joins the SP, BSP or Congress he will immediately be paraded as a secular messiah. It would become natural, that the scion of the Nehru-Gandhis has returned to where he belonged, the pro-establishment media will take no time singing paeans for him. For instance, they have no quarrel with Narayan Rane, Chagan Bhujbal or even Raj Thackarey all former Shivsainiks who were riled by the media as long as they were in the Shiv Sena.

The point is that all the breast beating and moral indignation and trial by media are exclusively reserved for the BJP. It is because Varun is the BJP candidate. The model code of conduct has been specially sharpened and imposed retrospectively with the Election Commission working overtime. The alleged speech actually was made weeks before the code came into operation. The EC has always displayed a double standard in the case of the BJP and other parties. This we have seen during the assembly election when it acted hastily in the complaint against Narendra Modi even as it let Sonia Gandhi off the hook with her mout ka saudagar innuendo. “We are testing the waters” a senior EC official reportedly said of EC’s advice to the BJP asking it to drop Varun as a candidate. It is a dangerous precedent it was trying to push. The EC cannot have been more careless with the choice of words. Did it intent to intimidate the party into following a particular line? The EC has not taken a view on complaints filed many days before the complaint against Varun was filed. It is similarly slow and silent—the media is equally co-operative by indifference—on all other instances of violations. But the EC was “seized” of the Varun case ever since it came to light. And when the Commission pronounced its order one channel claimed credit for the “impact” its expose had.

Advising Varun on reading Bhagwat Gita Priyanka Vadra Gandhi was repeatedly shown as coming out of a Hanuman temple as if that was of essence. If a non-Hindu pretending to be a religious Hindu goes to temple on poll eve it is only to hoodwink the voter. Gita of course is not a treatise on pacifism for Priyanka to advise Varun to read it. It can only strengthen his conviction. It is more a doctrine of war against evil, to protect one’s dharma even if that brings death. Perhaps Ms Vadra might have thought the Gita read like the Bible.

It is time Sonia Gandhi and her family declared their faith. A Nehru-Gandhi in the eye of the dominant establishment in the country can be a Catholic, a Parsi, an atheist or a Muslim and they will automatically be declared “secular” by the servile, obnoxiously bootlicking media. But to be a Hindu is blasphemous. They bay for blood. They want the abrupt termination of a budding political career, they are so unforgiving, vindictive, vengeful and mercilessly cruel.

Varun's reported views can also be taken as a first mistake of an over-enthusiastic debutant politician. Should a promising young career be so cruelly nipped in the bud invoking even the name of his father who was tragically killed orphaning him when he was only two months? Our chattering class like the proverbial wolf wants to punish him for the alleged omissions and commissions of his father also. Like a lynch mob they create the macabre atmospheric for the partisan establishment to convict and crucify. So we stand by anybody and everybody who speak for the Hindu. Because we want to make Indian polity Hindu centric.

Senior BJP leader L K Advani has drawn a parallel between the arrest of Varun Gandhi under NSA and imprisonment of leaders like Jay Prakash Narayan and Atal Bihari Vajpayee during the Emergency.

"I remember the Emergency when great patriots like Jai Prakash Narayan, Morarji Desai, Atal Bihari Vajpayee were arrested under MISA contending that they were a threat to national security," he said referring to the Varun Gandhi episode in an interview to Zee News.

Advani said Varun's arrest was a work of "perverse mentality" and the people of the country would not forgive such an act.

"Nothing can be more perverse than using NSA during elections... people should not forget that elections were conducted after Emergency and those who were jailed had won," he said.

Advani said the Congress' attempts to call him the scriptwriter of the Varun episode as an act of "desperation and surrender."

The National Security Act was invoked against Varun, who had been booked for making anti-Muslim speeches, last Sunday.