Raja may be a dalit, but not all dalits are Rajas. Raja who is projected as the Dalit face by the Karunanidhi, has infact fleeced the dalits of his hometown of their belongings and rendered them paupers. With the scam coming known to the public, the people are encouraged to come in the open to tell in what all ways they have been cheated and exploited. Here is a report on Raja’s exploitation which is not known to many. 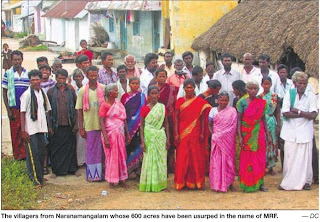 Dec. 12: While it has now become common knowledge across the country that former telecom minister A. Raja has been involved in the 2G spectrum deal, the biggest scam to rock the country so far, the question as to where all this money could have gone remained unclear.

If the thousands of villagers in Perambalur district who have been forced to part with their lands over the last few years are to be believed, Mr Raja and his associates have invested them in thousands of acres of real estate in Perambalur, Ariyalur and other neighbouring districts.

According to local politicians, the modus operandi was that Mr Raja would announce the arrival of a big project in a village like a government medical college or a special economic zone and purchase all the lands surrounding it at a cheap rate by threatening the locals. “Later, they would sell it to outsiders claiming that the new projects would transform Perambalur and that land prices would skyrocket. So far, none of these projects has materialised but the surrounding lands have been grabbed and sold,” said an AIADMK leader, on condition of anonymity.

“Mr Raja and his associates have usurped hundreds of acres of land in Naranamangalam, Kunnam, Udumbium and so many other villages in Perambalur, which is one of the most impoverished districts in the state. Besides, they have bought over thousand acres of land along Alathur gate–Trichy road, Ponnatrupalam, near Jayamkondam, etc.,” said Mr N. Chelladurai, secretary of the CPM-backed Tamil Nadu Vivasayigal Sangam.

The police have allegedly been hand-in-glove with the land-grabbers during their operation.
Mr Senthil (32) owned 3.5 acres of land in Naranamangalam and refused to sell it when Green House Promoters knocked on his door. “When I refused, Senthil Murugan and Selvaraj, who are Raja’s associates, forced the police to file a false case against me under the SC/ST Act and remanded me in judicial custody When in jail, the police repeatedly said they would quash the case and release me if I agreed to sell my land. When I did not give in, they tried to arrest my widowed mother also under the SC/ST Act and I had to relent in the end,” Mr Senthil said.

As a blatant misuse of the official machinery, Mr Senthil was released from jail and taken straight to the Chettikulam registrar office where he was forced to sign a sale deed at that night. “Anyone who can access revenue records can verify that I sold my property four hours after I was released from jail,” he claimed.

According to Mr Raja Chidambaram, state secretary of the Tamizhaga Vivasayigal Sangam, most of these sales are illegal as they are ancestral property. “In their urgency to grab villagers’ land, the buyers have not even got the signatures of the heirs to these properties that were sold to Green House and other dubious real estate agencies floated by former minister Raja. Any of these people could go to court and claim their land back,” he said.

Mr Chidambaram has held several protest meetings against the large-scale land-grabbing in Perambalur district over the last several months. Most residents of Perambalur admit that their sleepy town and the entire district have changed dramatically over the last few years. “But then, only a few have become rich and most of us have become poorer than before,” says auto driver Mani, who once owned five acres of land at Udumbium village in Perambalur district.

The former communications and IT minister, Mr A. Raja, and his associates have allegedly grabbed dalit lands in his district even while the Tamil Nadu Chief Minister, Mr M. Karunanidhi, has been trying to drum up sympathy for the DMK leader saying that he was being victimised in the 2G spectrum allocation scam only because he was a dalit.

Dozens of dalits of Naranamangalam village, in Perambalur district, claim that they have been cheated by Mr Raja and his associates who grabbed their land with the help of the police and revenue officials.

Mr Chandrasekhar (45), a dalit from Naranamangalam, used to be a land-owner three years ago. Today, he works as a casual labourer near the Perambalur bus terminus, earning Rs 80 a day to support his five-member family.

“I barely managed to survive using the income I got from my ancestral property of 3.5 acres of land. When MRF approached me through Green House Promoters to sell my property for the factory in 2007, I refused. But, I was threatened to part with it for Rs 90,000 an acre by Mr Selvaraj, one of the directors of Green House Promoters, and his associate Mr Senthil Murugan,” he said.

While the illiterate villager was told that the land would be handed over to MRF, he found out about a year later that Mr Selvaraj retained the land and had rented it out to MRF for Rs 50,000 a month and got an advance of Rs 3,00,000. “When I approached Green House Promoters, they threatened to eliminate me,” Mr Chandrasekhar said.

And he is not the only dalit who has been cheated. At least 60 dalit families from the village have lost their property to Green House Promoters, which is one of the real estate companies allegedly owned by Mr Raja. “Even last week, we gave a petition to the district revenue authorities. But they threatened to drive us away,” says Mr Raja Chidambaram, district secretary of the Tamizhaga Vivasayigal Sangam, the organisation taking up the issue with the government. 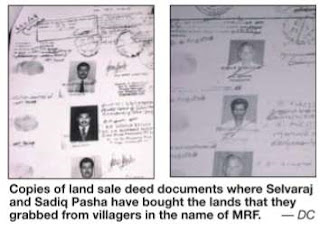 Marathadi vakkil to millionaire
Barely 12 kilome tres from Perambalur town, surrounded by lush green hillocks, is a quaint and scenic village called Velur.
Almost anyone here knows the directions to the “minister’s home” located close to an temple. When this reporter went there on Sunday evening, his elder brother Kaliyaperumal was at home and claimed to be ‘unwell’. He did not want to speak to reporters.
Andimuthu Raja was the eighth son of the family and had a modest childhood. He grew up with three elder brothers and four sisters.
After finishing his schooling in Perambalur district, he went out to pursue higher studies.
“When he returned home, he practised at the Perambalur court where we used to call him the Marathadi Vakkil. From being a marathadi vakkil, he has now become Mr Millionaire,” said an advocate and former friend of the minister. “Please do not quote me.
And you probably know why?" At that time, Sadiq Pasha used to sell textiles door-todoor. When not attending to cases at the court, Mr Raja and his advocate friends used to stay at Rasi lodge in Perambalur which was their makeshift office. "Sadiq used to come there to sell his clothes at the lodge and their friendship probably began there,” his former colleagues said. Over the next two decades, Mr Raja’s growth in politics was tremendous. He was soon elected as a member of Parliament and became a minister in the Union Cabinet.
Now, he is accused of swindling `1.76 lakh crore.
Locals here claim that Mr Raja did make significant contribution to Perambalur during his first term as an MP. “He used his clout to get some state projects to Perambalur,” said Mr Tada Periasamy, a prominent BJP politician and a longtime resident of Perambalur. “But over the last few years, the former minister has done nothing for the district. He just amassed more and more wealth to the dismay of his own district people.”
Posted by jayasree at 7:33 PM

Hello, Nobody in Tamil Nadu will buy Kalaignar's lament that Raja was victimised 'coz he is a dalit. Also he never was and never will be viewed as a representative of the Dalits. In fact, many people know that he is a dalit only after the spectrum scam. So why beat a dead horse to pulp? These kind of things are happening in all the parts of India. What were these people who are now crying 'wolf' doing when he was in power. They kept mum 'coz it suited them. Now they are shouting from rooftops. Nothing will happen other than newspapers get some sensational news and blogs like this get some fodder to degrade the dalits. Just like every passerby gives a kick to a caught thief, Raja has now become the favourite whipping boy. Another chapter in the big Indian Democratic Circus Company