Paavai Nonbu to have started today – so also prayer for rainfall next season.

The Full Moon day of the month of Margazhi is a momentous day, as Paavai nonbu (பாவை நோன்பு) was done on this day. Andal started her Thiruppavai by noting the day as that of Full Moon (மதி நிறைந்த நன்னாள்). Today the 25th December of 2015 saw Full Moon at sunrise. If we were to have followed the tradition of Paavai nonbu, we would have thronged the river banks early in the morning to take a dip in the ice cold waters of the river. 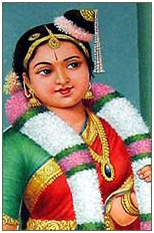 The description of the scenario given in the Sangam text of Paripaadal is exactly the same as how it is today – a land ravaged with flood waters! The recent floods and heavy rains were not anomalies in this season of the year, if we go by the description given in Paripaadal verse 11. Heavy rains have left many places with pools of water and the sound of thunder of the rainy season had just ceased (கார்வானம் கனைக்கும் அதிர்குரல் நீங்க). The sun is cool as it comes up after the rainy season that has made the land a lake (ஞாயிறு காயா நளி பின் மாரிக் குளத்து). It is for this reason the month of Margazhi was also known as “KuLam” which means tank.

However there is another clause to be fulfilled for initiating Paavai nonbu. The Full Moon must coincide with Arudra star, known as Thiruvadhirai in Tamil. This coincidence generally happens in alternate years. This year the Full Moon did not see sun rise in Arudra star. The evening Moon in Prathamai coincided with Arudra which gave the famous name ‘Arudra Darshan’.

Tomorrow morning (26th Dec 2015) there is going to be special puja in all Shiva temples in Tamilnadu for Lord Shiva, known as Arudra Abhishekam. The Sangam age Paavai nonbu was the precursor to this Puja. Even though Full moon combining with Arudra was the occasion to start the Nonbu, presence of Arudra is a pre-condition for this Nonbu, even if Moon has crossed Full Moon phase. 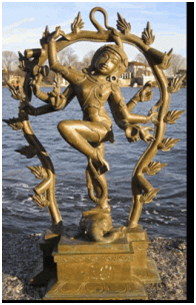 So ideally, tomorrow morning, Tamils must start the Paavai nonbu.

Why is it so important? My old article on how Paavai nonbu was done gives details on how and when it was done and also the reasons for doing it, as known from the Paripaadal verse. The outward reason was praying for happy married life. But the core reason is welfare oriented. It is to generate rainfall in the upcoming rainy season in the next year. Andal expresses it in her Thiruppavai verses 3 and 4.

Rainfall is regarded as “Purva Chitti” or prior wisdom. Whether it rains in a particular place or not is determined 6 and a half months (or 195 days) before that date. Terrestrial, atmospheric and heavenly (planetary) symptoms are noted right from the time of Margazhi to know whether it will rain in a place 195 days after that. Of these symptoms, terrestrial symptoms can be partially induced. That is where Paavai nonbu done by young girls is introduced to create a terrestrial ambiance. These symptoms were already written by me in the 1st part of the series on Rainfall prediction. I intend to write them again in the upcoming articles as I expect the rain ravaged people of Tamilnadu to show more interest in understanding rainfall prediction beforehand to be better prepared in the next season.

For the kind of relevance for today’s Arudra star, let me confine myself to the importance of this day.
Arudra is the star of Lord Shiva (Rudra). Sun is signified by Rudra or Shiva. There is no need to emphasise the role of Sun in influencing the climate and particularly the rainfall. The evaporation needed for cloud formation is basically related to the Sun. The day or rather the time Sun enters the Arudra star (this happens in Gemini or in the Aani month in Tamil) is very important for rainfall prediction. That time is noted as “Arudra Pravesham” in almanacs. The day of the week, thithi, yoga, karana, lagna, Moon’s position and the time (whether night or day) are noted when Sun exactly enters Arudra in the month of Aani. That tells about the amount of rainfall in the months following that (South west monsoon).

Today is the day approximately 6 and a half months prior to that date in 2016, when Sun is just opposite to that position in Sagittarius (Margazhi) now.  Today, Moon is crossing Arudra with Sun 180 degress away from Arudra. The prayers done to Lord Shiva on this day is for an auspicious entry of the Sun in Arudra on June 21, 2016. Divine help is sought after as a first step to ensure bountiful rainy season next year. The dance of Shiva on the banks of the river on the Arudra day on Margazhi in olden, Sangam age Tamilnadu was to ensure prosperous season for the people 6 and a half months later when Sun crosses Arudra.

The upcoming year’s Arudra Pravesham is not all that good and not very bad. Sun enters Arudra on 21st June 2016 at 11 PM in the night.  The day is Tuesday (not good), thithi is Krishna Dwitheeya (good) Brahma yoga (not good), Taitula karana (good), Kumba lagna (not good) and night time nearing mid night (good). At that time Moon will be in Sagittarius (not good) but in the watery star Pooradam (Purvashada) (Very good).

So the very first general prediction for next year’s rainfall is that there will be rains at some places through storms. Arudra pravesha on Tuesday lorded by Mars causes storms and destruction at some places and dryness at other places. Usually Mars is associated with heat and destruction. The upcoming year’s (Durmukhi) Meghadhipathi also happens to be Mars.  Association of Mars does not give good rainfall; it causes destructive rain through storms at some places. Since storms are indicated, it can be surmised that North east Monsoon will yield good rains as that monsoon is associated with storms and depressions. More Bay storms can be expected.

The inference from this is that South west monsoon may not be helpful. The hailstorms associated with it in the beginning of the season can be expected. (These inferences must be checked and observed for a minimum of 5 to 9 years) to arrive at workable factors in rainfall prediction.)

Barring the pravesha lagna and Yoga, the thithi, karana and night time entry are favourable for good rains in general. Moon in Purvashada star is also very good for good rains.

This is the first level prediction for rainfall in the next season. This must be combined with the kind of Megha  for the upcoming year. Readers may recall my article on 9 clouds in the 5th part of my series on rainfall prediction. The upcoming year is going to have “Neela Megham” It gives mixed trend of heavy rainfall at one place and scanty rainfall at another. (In contrast, the current year’s Vaaruna Megham gave plentiful rainfall to Tamilnadu). This matches with Arudra Pravesham on Tuesday and Mars as Meghadhipathi.

The general outlook for all the Meghas is given below.

The general outlook for how to assess the Arudra Pravesham (Sun’s entry into Arudra) is given below.

Star at the time of entry:- Star means the star in which moon will be transiting at that time. Bharani, Arudra, Aslesha, Magha, Chithra, Vishaka, Jyeshta are not favorable for good rainfall.  This year Purvashada will be the star at that time. This is favourable.

Yoga at the time of entry:-  This can be checked from the almanac. Atiganda, Shoola, Ganda, Dhruvam, Vyagatam, Vyatipadam, Brahmam, Aindra and Vydhruthi are not favourable. This year Brahmam is the yoga at that time. It is not favourable.

Karana at the time of entry:- Vishti, Sakuni, Chathushpaadam, Nagavam and Kimsthugnam are not favourable. This year Thaithula karanam will be running at that time. It is favourable for good rainfall.

The Lagna at the time of entry:-  This can be known from the astrology software. The lagnas Taurus, Cancer, Libra and Pisces give good rainfall. Virgo gives stormy weather. Others are not favourable for good rains.
The lagna must be checked for respective places. For Chennai, it is Kumbha which is not good for rainfall.

Location of Moon at the time of entry:- If Moon is located at watery star, watery sign, watery lagna and watery navamsa, there will be good rains.

This year Moon will be Sagittarius (not good) but in Purvashada (good for rains).

After this preliminary observation we must proceed with “GarbOttam” or ‘pregnancy of clouds’ that start with the entry of Sun in Purvashada star. It starts on 29th December 2015 at 5 PM. I will continue to write on how to check Garbottam just before 29th December.

(This short series on rainfall prediction for next year is aimed at helping interested people to track the features to be written in this series.  As per this, observation must be done on daily basis starting from 29th, the day of Garbottam. This must be done for each region however small it may be. For instance, within the city of Chennai, it may have rained in one place and not in others. This rainfall prediction based on Vedic astrology as told by seers, must be checked and tracked for any given place and the findings would hold good for that given place only, though the overall picture is given by factors such as Arudra Pravesham and Megha as told above. It is imperative that tracking of meteorological features as per this method must happen in each and every place and for all days to come till the rainy season starts.)

My articles in Tamil on Paavai nonbu published in Tamilhindu.com can be read here:

A series of articles on rainfall forecast will be posted in that blog in an attempt to check meteorological events with astrological features. These articles will also be posted in my blog.