The 2nd half of the last day of Garbottam showed some redeeming features thereby indicating that my place of observation and Chennai would indeed see some rains in December. The Garbottam features picked up after Utthradam ended around 11 AM on 11th January 2016.

The 13th day started with good breeze and clear sky. The morning was cool but bright with less of reddish hues. The clouds were sparse and gave a brushed-away appearance. But by 11 AM the clouds were spotted in the east and the south with good breeze which continued till the end of the day. The following sequence of photos of the sky will reveal how the Garbottam features picked up after 11 AM.

At 8 AM – Clouds looked fanned away 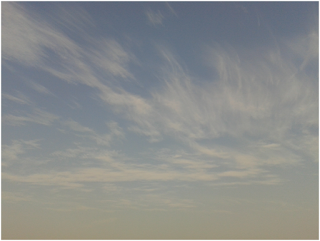 A kind of thwarting away of the fetes, which will be manifest as shattering away of clouds and winds at the time of rainfall in December 1st week of 2016. That is, the clouds that would be moving towards my place will be dissipated or pushed away from my place at that time.

Another appearance of dissipated clouds at around 9 AM. 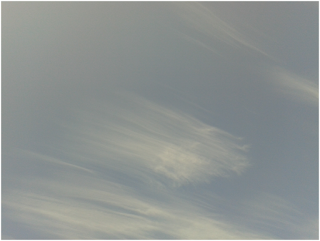 By 11 AM clouds were seen moving across the sky and towards the Sun, some of them featuring aquatic shapes. 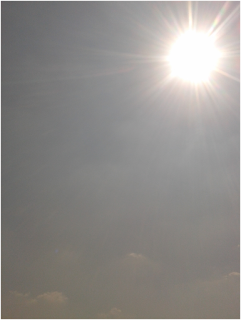 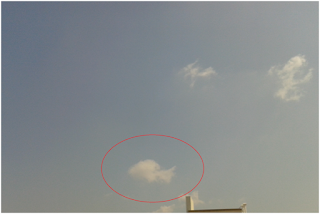 Groups of clouds were moving in the eastern sky from North to south. The wind was from North and east at that time. 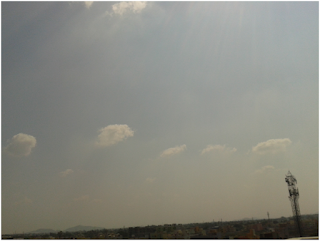 At 12.30 PM more distinct forms of aquatic animals were seen. 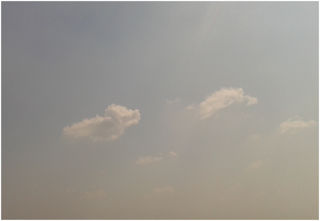 Clouds were crossing close to the Sun and were shining with a halo in sun light. 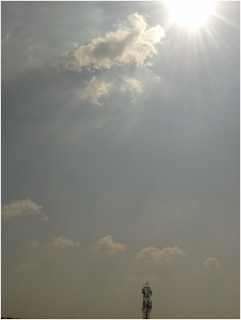 The same continued at 1.00 PM though clouds were not actually hiding the disc of the Sun. If the sun is hidden that is a wonderful Garbottam feature. But that did not happen though faint clouds crossed the Sun. 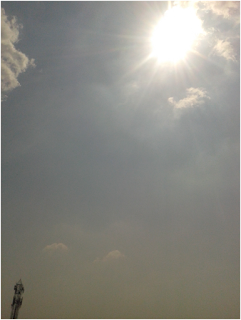 The crossing of the Sun by small bunches of clouds continued at 1.30 PM 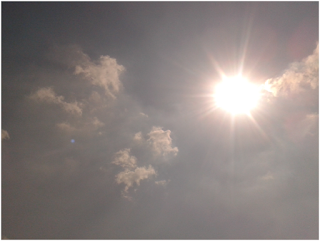 At the same time aquatic figures were weakly formed in the east and northern sky. 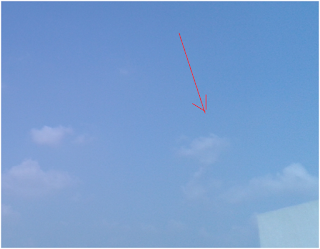 From North to south clouds with such features were seen moving. This shows that winds and rainfall in the corresponding season will be from south. 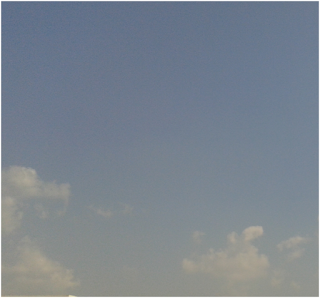 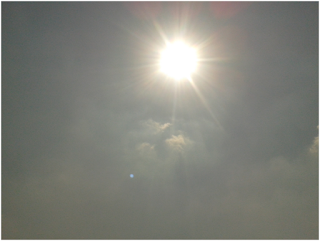 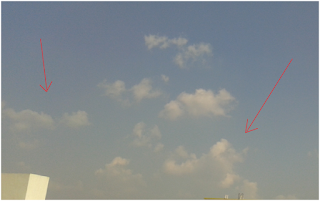 By 3 PM, the aquatic shapes were very much less, but there were clouds in north, east and south. 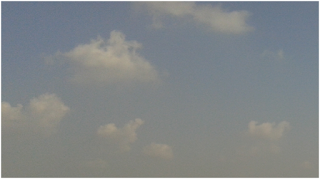 The sun was surrounded by clouds but they were not glossy nor were they hiding the sun. 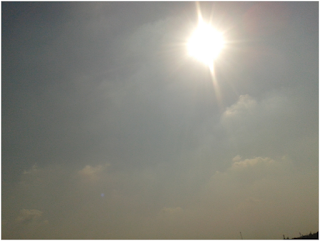 By 5 PM the aquatic forms were thwarted and bunches of clouds vanished. The Sun was preparing to set in grand red horizon. 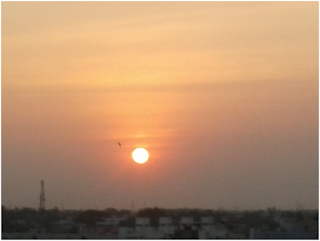 A beautiful reddish sun accompanied by streaks of clouds. This was missing on the 12th day. 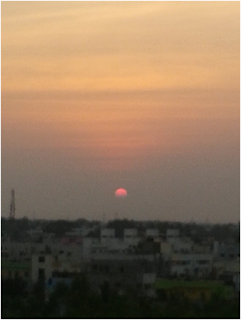 The observation of the 5 factors for day-13 are as follows:

(1) Wind:- Gentle and pleasant wind at the time of start of the 13th day. The wind was from west and south. In the morning around 9 AM, gentle wind was blowing from North West. Throughout the day the gentle winds continued.
Result:-  A good feature of Garbottam. Initial direction shows rainfall – wind direction from North east. In the 2nd half of the fortnight the direction will be from south east.

(2) Atmospheric :- Of the 12 features noted in my blog on Garbottam, (1) Gentle breeze was there throughout  (2) Small bunches of clouds in aquatic forms started in the last quarter of the day. (3) Clouds were pale and blue tinted at times.

195th day impact:- Rains can be expected in the night of 21st  July 2016. This day comes in the corresponding fortnight of the 3rd day of Garbottam. This fortnight is likely to be wet particularly in its later half. The Garbottam effect on 21st July confirms rainfall- conducive features in that fortnight.

NE Monsoon:-  It will progress efficiently. Initially the direction will be from east and north east. Later it will be from south, south east and south west. It will last till 16th December.

The Garbottam observation based on Sun’s movement in Purvashada (Pooradam) star is over by now. This gives a general picture of rainfall season of 2016 starting from June till December. This has to be checked and correlated with real time rainfall to assess and fine-tune this knowledge of the ancients. I will be checking it throughout within my capability. The rainfall prediction is not over with this. It is continuous and goes on day by day basis. I will be writing them also in subsequent posts. The concept of 195th day impact is assessed till the month of Vaikasi for Tamilnadu. That is, till Vaikasi this kind of Garbottam observation must be done to know the actual rainfall on any day upto Karthigai.

The gist of the observation of this 13 day Garbottam will be written as a separate blog. So far the overall observation as far as my place of observation in Chennai is concerned is that there WON’T be a repeat of floods of 2015 in 2016. The rains will be less compared to 2015 in Chennai. However other parts of Tamilnadu may be lashed with good rains given the good run of NE Monsoon from November 16, 2016 onwards and even before that starting from October 27th.  It depends on the Garbottam features in those places.

This was the first time I watched the sky and environment continuously and with fervour. I was consciously feeling the wind, its direction, the heat and the chillness. The following of the Sun throughout the day and looking at it vanish behind the haze of the horizon sank my heart with lost feelings of ‘oh when am I going to see you again”!! In this Thiruppavai month, the words of Andal looked so real and that the Sun was Narayana. “Unthannodu uravel namakku ingu ozhikka ozhiyaathu” (உன்றன்னோடு உறவேல் நமக்கு இங்கு ஒழிக்க ஒழியாது). My connection with the Sun is forever. He will come back though he vanished from my sight in the evening. எற்றைக்கும் ஏழேழ் பிறவிக்கும் உன்றன்னோடு உற்றோமே யாவோம் உனக்கே நாம் ஆட் செய்வோம். Therefore மற்றை நம் காமங்கள் மாற்று. Oh Sun, purify my mind.

The Sun is the core factor of weather and climate. Following its movements give us an idea about its mind. The Sun is the bestower of everything in the world and everything depends on the rainfall and the conducive climate for prosperity. The winds, the cloud formation and even the wobble of the earth are controlled by the Sun. The Sun looking different on different days at sunset make me think that every day is a different day though we do not understand more than the heat or less of it on a day. The Megha concept is very much dependent on Sun. The cloud formation that looked like a blanket around the earth on 19th November 2015 is a phenomenon associated with Sun and its effect on cloud formation in this VaaruNa Megha year (2015-16). I will write those ideas in my upcoming posts.

Personally, it was philosophical bidding good bye to Sun on this 13th day. The Sun is the foremost witness of our lives through scores of our births. How many times in my past births have I watched the sun rise and sun set! But at this time in my present birth I am watching the Sun with a cosmic purpose, for the sake of adding to the understanding of weather and climate and for the sake of bringing out the un publicised and unknown knowledge of the rishis of yore. May the rishis guide me in my yearning for understanding their minds; May the Sun uplift me to the state of Brahma Jingyasu!

This comment is not relevant to the present article.

However this is a suggestion to read The Plot in Indian chronology by Shri Pandit Kota Venkatachelam.

I hope this will be of use to you while dating the ancient kings.

Maam can you please summarise all the days of Garbottam and create a chart on what to expect at which period, it would be easy for us to track the actual rainfall events and confirm our observation. Thanks

Yes, I will prepare and post it in my blog and send you the link. Meantime, the observation is continuous and is not confined to this 13 day Garbottam alone. There are many checks and updates through the next 7 months. Positive indications during those periods also are needed to fine-tune our prediction.

In today's context, the 3rd day crescent moon (Moondram pirai) is also an indicator. In margazhi the northern tip must be higher than the southern tip. Today the Moondram pirai had the southern tip slightly - very slightly higher than the northern tip. This tips the balance to a little less than average for the corresponding season after 6 and a half months. That is in July 2016. The 2nd and 3rd day Garbottam showed some rains which I deduced as less than 30% of the average of those months (July). The crescent of today also confirms this but gives a hope that rainfall may be little higher than indicated by Garbottam of those days. Because the southern tip was not significantly higher.

My next post will be on Crescent moon and other features of moon as indicators forrainfall.

I have read Sri Kota Venkatachalam's articles.Very valuable articles. I have quoted his views on Yavanas in a separate article on Yavanas in my blog. As of now I am not concentrating on chronology of Indian kings.