Part 1 can be read here.

Diabetes is the most common disease of the present times. With nearly 50 million people suffering from this disease, India has earned a notorious name as the Diabetes capital of the world. This blog is exclusively on the karmic causes of this disease and remedies.

But before going into the details, let me highlight a feature from a temple- inscription found in Coimbatore region that says that a person was cured of this disease. A person by name Tribhuvana singan was suffering from diabetes (prameha) and prayed to Lord Shiva, known by name Lord Marudeesar at Kadathur temple, to get relieved of this disease. He did get relief from this disease and pledged to donate 1 kuruni rice (1 kuruni = 8 padi which is roughly equal to 12 kg) every day to this temple. This is mentioned in the inscription found in the eastern wall of the mandapa of this deity. This happened in the year 1302 CE. 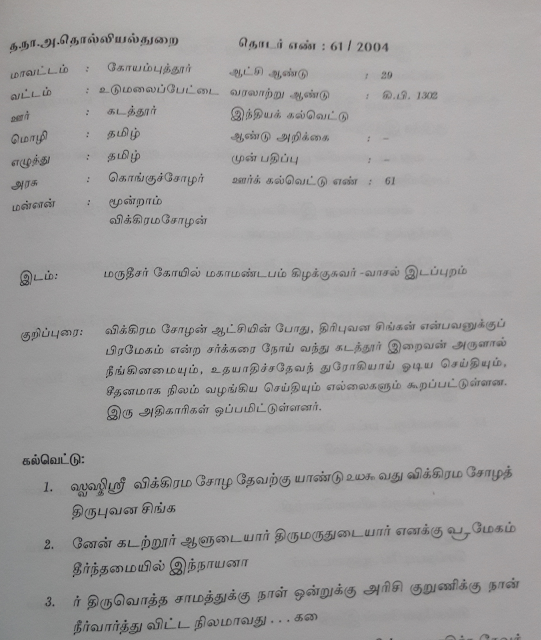 The original name of this deity is Marudavaneswarar, meaning the one who belongs to Maruda vanam. Marudam is a tree which is known as Arjuna tree in Sanskrit. That is the reason this deity is also known as Arjuneswarar.  Arjuna tree grows in nature where there is abundant underground water. In Mahabharata, Arjuna fetched water to Bheeshma on the arrow-bed by shooting an arrow at the water vein near this tree. It is perhaps for this reason this tree got the name Arjuna.

The deity of Kadathur, Marudeesar is seen near water in such a way that the reflection of sun rays on the water falls on the deity. This happens throughout the year. 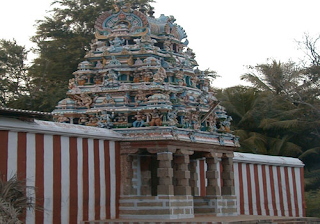 {Read more on this temple here }

In Ayurveda, the ingredients of Arjuna tree are used to cure heart diseases. In popular belief, the deity connected with Arjuna tree (Marudam tree) has answered the prayers related to water. Diabetes or Prameha is known as “Neerizhivu” (நீரிழிவு நோய்) in Tamil, implying that it is to do with loss of water (passing urine very often). From the inscription it comes to be known that people suffering from diabetes had prayed to this lord and got cured. The name Marudeesar in the inscription also shows how the original name has changed over time from Marudavaneswarar even as early as the 14th century. That means this deity is very old and the temple had existed many centuries before that.

Having given a remedial worship to cure diabetes through this information, let me now go ahead with the karmic causes for diabetes as given in Pransa Marga and Karma Vipaka text called Veerasimhaavaloka.

Two revelations from the above table:-

(1) In the Kadathur temple instance written above, the donor must have chanted Rudra sooktham and Varuna Gayartri to get relief.

The meaning of Varuna mantra / gayatri is relevant to Marudeeswarar of Kadathur temple.
Varuna Gayatri is as follows:

Om, Let us meditate on the reflection of water
O person of ocean blue, give me higher intellect
And let the God of water illuminate my mind

Reflection of water on the deity Marudeeswara, when meditated upon has reduced the loss of water due to diabetes and cures one of that disease.

(2) From the inscription it is also known that donation of food in the form of rice had been done as a remedy.

Generally gift of food is the best remedy from any disease. Prasna Marga says “The ‘gift of health’ is the most important of all the gifts. If anybody wants to be free from diseases and be healthy he should help the sick with food and medicines.” (Ch 23- 41).

“Kings and rich people should establish free hospitals. Ordinary people should at least give food and medicines to the sick. Then their sickness will disappear.” (Ch 23 -40).

As diabetes is primarily to do with food not being taken by the body to keep itself healthy, offer of food to others is the primary remedy for cure.

Excellent Article Madam. Can you also write about Vitiligo caused due to Melanin deficiency and what is the remedy. This seem to be common these days and i see many people getting affected.

Thanks Mr Raghuraman. My next article in this series is on rheumatism. After that I will take up the skin related diseases. I think Vitiligo is same as Paandu roga and as such can be clubbed under skin related diseases. The texts have ancient / Sanskrit names for the diseases and I have to understand them with their medical names in vogue today, before writing about them. I will give the description of the diseases where I don't get their present day names. Readers can interpret them from their knowledge of the diseases.

One observation karma mentioned is most about men who did karma resulting diabetes..

What you say pertains to relationship issues. It should be the reverse of what is given here. And there are other issues also in the list which are common for both men and women. As far as relationship issues are concerned, adultery was one of the common issues in the past. There is a reference in Manimegalai (one of the 5 epics in Tamil) to a woman from Varanasi making a trip to Kumari temple at Kanya kumari to propitiate for the adultery committed by her. However such issues were less in number in the past which explains less prevalence of diabetes in the past. Read my post on Sapta Kanni worship in https://jayasreesaranathan.blogspot.in/2016/01/from-ganges-to-indonesia-to-indus-sapta.html

Good article Jayasree madam. Is there also a remedy for neuropathy - which causes foot burns and pains?

There is no specific karma vipaka given for Neuropathy, mainly because its manifestation varies / affects different organs in different persons. In such case we have to see the causative planet for Neural diseases and combine it with the causes for the specific ailment afflicting a person.

Mercury is the planet for all the neural-related diseases. In the case of problem in the feet, it is to do with some karma related to feet in the previous birth. It could be anything like, injuring someone's feet, breaking someone's leg, causing someone's feet to suffer burns and the like. It could also be due to running away with some one's money or eloping with someone thereby causing suffering to parents.

Since nervous system is involved which is directly connected with the brain, the karma / act of suffering caused to someone was done knowingly and deliberately.

Deciphering remedies in this case, Mercury (nerves), Saturn (leg)and Jupiter (feet, as Pisces, the house of Jupiter signifies feet) must be propitiated. By this combination, yet another karma vipaka can be deciphered. Causing some elderly person, or a teacher to suffer immobility can also be the cause.

In addition to the planets mentioned above, look at the 6th lord in Rasi, the Navamsa dispositor of the 6th lord, the lord of the house in Rasi where this Navamsa dispositor is placed must be checked. Look for the common thread and connection between them and the lords of the dasa and bhukthi when this problem started. Those planets must be propitiated.

Mam, can you throw some light on skeletal related disorders and pelvic bone related problems.

Your articles are very informative and thanks for your efforts in sharing with general public ,it is much appreciated.

I have given in these articles whatever is available as of today (in available books) on karmically induced diseases. Apart from these there are many other diseases or ailments which are also karmically induced but not of universal nature. (what is written in the articles are universal). Each one's horoscope will indicate (6H and related ones) such diseases or weaknesses. Bone / skeletal related diseases come under this category. Basically Sun and Saturn govern the bones. The organ can be known from the signs (kala purusha). A combined reading of them revealing the diseases or weakness can be related to similar causes.

For example, sun and Saturn, the signifcators of bone signify father or anyone in the stature of father. A wrong done to them in a previous birth could result in bone diseases.

Any disease related to the bone can be linked to the function it controls. From the afflicted function, one can deduce the causative karma.

For example a problem in the pelvic region for a woman could mean a wrong done to the mother or a pregnant woman. A problem in the knee could mean one had caused injury or some such thing to the mobility of another. This covers even the injury to animals, say a dog or a cow. A problem in one's mobility could also mean that one has run away from a situation in violation of dharma in a given situation. This has resulted in disability to move the leg. Like this one can interpret based on the disease and the affected functions. Planetary combinations in the horoscope help in fine tuning these causes.

Thank you, interesting approach for both dharma, deities and the modern medical conditions.
However there are various types of what is called diabetes.
More commonly type 1 diabetes in which the body completely destroyed it's ability to metabolize glucose on it's own, type 2 diabetes in which sugar builds up getting metabolized slower than administered and can be reversed by changing one's lifestyle.
And less common- Diabetes insipidus in which the body cannot regulate urination (again, destroying), this one is not related to sugar and Metabolism as much.

Would be nice to know if you refer to all of those conditions in general or to a specific one.
There are various conditions named prameha as well.
Also, I know people with different types of diabetes, most of them are very "giving" and abundant and the described "Previous karma" doesn't seem like them at all.

What we are now in this birth is not necessarily what we were in previous births. Hitler if born again, may be a doctor healing many people, or a Nobel winner for discovering a life saving drug. This is one part of working out his karma for having killed so many. Experience of sufferings he caused to others by killing may come in any birth or spread across many births. So by looking at what one is now, is not proof for what one was in a past birth. So one who is "giving" now need not have been so in a past birth. May be what he is doing now is a 'prayaschittha' - propitiation for what he did earlier. This part, we have to be clear.

On types of diabetes: Planetary combinations in a horoscope help us in deducing a disease. Many combinations are there for each disease including diabetes. There are books on medical astrology - mostly research works by studying 100s of horoscopes. You may get them to know the various combinations.

My blog above is only about the prarabdha karma behind the diseases. When one suffers a disease, the uppermost thought is why me. When you know the causative karma, you attain some peace within yourself and even repent. Repentance and associated propitiation are the best means to ward off the effect of Prarabdha karma. Knowledge of causative karma also makes one desist from doing such karma.