Giving free cycles as part of one-time puja scheme in a temple is okay, but building a temple is not okay for the rulers of Tamilnadu!
Readers might wonder what  a cycle has to do with temple puja. But that is the brain child of our Chief minister Mr Karunanidhi  who thinks that by donating a free cycle to the priests, they can come on time to the temple to conduct the one- time pooja. This facility was extended to priests of the temples where only one- time puja (oru - kaala poojai) is being done.  A person of Karunanidhi's mental make-up can not think how the crores of money spent on the cycles (all cycles painted yellow, his lucky colour) could have been diverted to conduct the puja for the 2nd time also in those temples. This much is what he knows about temples and how they must be taken care of.

So it is not surprising to expect this man to reprehend his MP for signing a memorandum for building Ram Temple at Ayodhya. Already the name, Ram is allergic to him. He is the exact opposite of whatever Ram stands for! Even after the court verdict on the historicity of Ram and his Janmasthaan, this man can not accpet a temple at Janmasthaan. Will he behave the same if the temple in question is that of Christians and Muslims? It is high time that he is thrown out of power and dumped for ever. 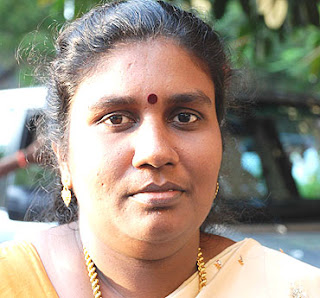 First-time DMK MP from Kanyakumari Helen Davidson is at the centre of a controversy as she is reported to have pledged support to the building of a at the controversial site in Ayodhya.
Ms Davidson has affixed her signature in the memorandum of hardline Hindutva organisation Vishwa Hindu Parisad that urged the President to take initiatives to construct in Ayodhya following the Allahabad High Court verdict.

Acting swiftly, the DMK leadership on Tuesday sought an explanation from Ms Davidson about news reports that she had signed on the VHP campaign, offering support to build the .
Ms Davidson said she had signed the papers when VHP leaders approached her in her hometown, without even knowing what the matter was all about.


Muslim organisations have taken strong exception to Ms Davidson’s open support to the mandir movement.
Though the party welcomed the Ayodhya verdict initially, DMK president M.Karunanidhi later criticised the judgment by saying that the court confirmed that the disputed land was the birthplace of Rama, when "Tamils have yet to find out details about the death of King Rajaraja, his tomb, or his memorial although the great king lived just 1,000 years ago." "The Aryan civilisation which tried to topple the Dravidian race has acted vigorously to cultivate superstition among people," he said.