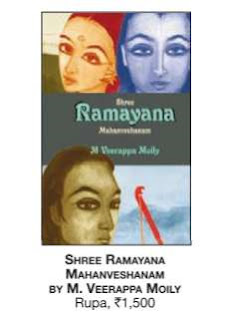 EACH GENERATION of Indians has seen amidst them Rama, the hero of Ramayana who has come to personify the highest level to which a human can aspire. It's also the commonest level to which the divine would descend. Ramayana has inspired generations of Indians, and many political leaders have found in Ram Rajya the model of an equitable society.
However, M. Veerappa Moily, Union minister for law and justice, is perhaps the only contemporary politician who has dived deeper into this fascinating epic to produce his magnum opus. Gandhiji, Tilak, Rajaji, Aurob-indo and Dr S.
Radhakrishnan all tried to interpret the Ram-ayana and propound Shri Ram to replicate and explain their political paradigm. To that sense Ramayana is as much a political treatise as it is a spiri tual text.


Drawing heavily from Valmiki's Ramayana and its numerous versions, Moily, in his Shree Ramayana Mahanve Ramayana Mahanveshanam, attempts to inquire the ancient saga in a new perspective. What we have is an excellent work embodying a rare purity of thought, and lofty moral ideals expressed with an alluring poetic charm. He has made the context akin to the Indian situation today. He has taken liberties, allowed his personal likes and biases to creep in, but never deviating from the spirit and substance of the original theme.


Moily took almost a decade to complete the original work in Kannada, in five volumes.
His team of brilliant translators took another two years to render the 43,000 verses in English in two volumes. To paraphrase what Moily said in his Preface, "...the work of an individual's mind has today become the work of collective mind", a metaphysical history.


Moily has shown that the problems confronting us today can be understood and solved by learning from the Ramayana. He states with candour that with its new economic, political and industrial forte requires a revision of moral and social ideals. But any change, which does not grow out of the past, may prove highly devastating.


Indians have not yet done what W.R. Inge said of the new generation in other countries -of taking "great pleasure in removing the household gods of its parents from their pedestals and consigning them to the cupboard". Because our gods are also humans in flesh and blood, with failings, emotions, weaknesses and passion.

That is why, as Moily underlines, Ramayana is one of the rarest of rare books in human history that has survived time and endured revisions, recasting, renderings, interpretations, adaptations and denunciations, yet retaining the intense sway of its kernel theme on the thinking and world view of the people.


Moily presents not an academic discussion of any moral theory, but a concrete moral ideal in the narrative of various personalities, particularly the chief characters of Rama, Sita and Lakshmana. Valmiki also composed the original work in a "loose and troublesome age", when the evil of terror challenged the virtuous fabric of the sovereign state. Against such a background the Ramayana asserts the force and efficacy of good.


Moily has sorted out his "doubts" in this quest. The minor "corrections" he has made have gone well with the basic format. Like where Ahilya accepts her "momentary lapse" and seeks to become stony frozen, emotionally, to perform penance, or when Sita gives her reasons for declining to be rescued from Ravana's captivity by Hanuman. Moily says he has used the medium of poetry as it is the most effective one. The story of Ramayana is well known, and yet there are many poignant episodes that Moily recreates with great insight.


For instance, when Rama and Lakshmana are about to leave the forest after killing the rakshasas, and guarding the yagna, a woman accosts them and tells them that the rakshasas had taken away her husband and had sexually abused her. She is pregnant and the community is eschewing her as a fallen woman.


Consoling her, Rama says: "Get up, mother! Become the dynamite to explode around Community awareness. Think of your suffering As a bad dream; it will not recur. For all women You be the model. Take on the form of Durga The destroyer of the wicked and evil The edge of selfishness blunts it; break it immediately."


Here is a woman emancipated and empowered. In Ramayana, as Moily repeatedly illuminates, women are neither weak nor victims of male domination. Yet again, in the context of Ahilya, Moily lucidly flourishes his thoughts through Rama: "While a smile that could melt stones/Flashed over his lips," Shri Rama said, "We are representatives of the society that ruined you. Why should we say that? We are princes of Ayodhya/We beg you, please forgive the wrong, mother/The law of punishing the innocent and protecting/The wrong-doers is ours alone/Looking at this, heads should be hung in shame/Law cannot tolerate dishonouring women."


The endeavour for peace, harmony, protection to weak, forest dwellers and the poor marks Moily's version. At Chitrakoot, Rama speaks about protecting the environment. He tells Lakshmana not to cut young trees for building the hut: "Do not cut living trees. It hurts the environment. Search for logs of dry wood and bring them over".

There, Sita organises the forest dwellers, who were slaves, into cottage artisans. She interacts and encourages them to become independent.

One of the most touching scenes in Ramayana is the meeting between Bharata and Rama in the forest. It is a scene that yields to dramatisation and is exploited to the hilt by Moily. He describes the agony of Bharata when the sages in the forest suspect him of deceit. On seeing Rama he runs unto him, "strength being lost in excess of sorrow", and falls at the feet of Rama, collapsing. Bharata's eyes won't stop the tears, and Rama embraces him, trying to soothe him.


The beauty of Ramayana is that it realises that abstract moral principles, detached from the real life of human beings, can only be logical perspectives failing to influence the course of human conduct. Moily tries to take off from here, and he does it with aplomb.


In Shree Ramayana Mahanveshanam the principles of governance, morality and righteousness are set forth in real time human situations.
Vishwamitra's words to Rama, Rama's words to Bharata, Vibhishana's advice to Ravana.
The philosophy of non-violence is bewitching to the author.


Not having read Moily's original work in Kannada, one cannot comment on whether translation retained the poetic felicity and imagery of the author. But it is clear that it's been a fulfilling quest for Moily. He has dedicated the book to his wife, Malati, in touching verse.


Rajaji's Ramayana is very popular, but in short crisp prose. Any rendering of the Ramayana ultimately is a work of devotion. So there is no point comparing one with another. All of them in different ways enchant you. No doubt, to read this volume is a delightful experience. As one goes through the work, Moily's skillful creation of the plot, the unity of the poem, the flights of imagination and balanced treatment of incidents are striking. His grasp of human psychology and delineation of human character mark his work. With Shree Ramayana Mahanveshanam, Moily has assured his place among the pantheon of Indian writers fired by Ram's mystique.

Email ThisBlogThis!Share to TwitterShare to FacebookShare to Pinterest
Labels: Ramayana

if possible please up load sir