Reports of rainfall have started coming and I, like a school student waiting for exam results have reasons to be happy, for, the developments on meteorological side tally with planetary indicators that I have been writing for some time under the tags ‘Garbottam” and “Meteorology”.

Mercury coming out of combustion.

The first rains in the Indian sub-continent occurred when Mercury ended combustion between 4th April and 6th April 2016.

Mercury and Venus are the two planets of importance for rainfall with Mercury signifying winds and Venus signifying water. During the monsoon or pre-monsoon months, when these two planets become combust or come out of combustion, there will be rains. In the case of Mercury the rains will be accompanied with winds, thunder and flash floods. Venus brings copious rainfall.

Combustion (Asthang or Asthmanam) indicates closeness with Sun. The degree of combustion is 14 degrees for Mercury and 10 degrees for Venus. For the first time in this season, Mercury came out of combustion on dates between 4th and 6th April. For nearly 3 days Mercury was away from Sun by 14 degrees. 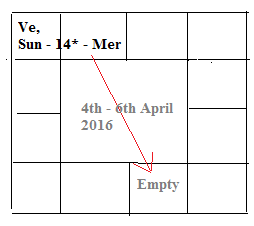 At that time Mercury was in Aries. Sun was behind it and posited in Pisces followed by Venus. As Mercury was in the front of this line-up, hail storms and thunder showers accompanied with flash floods occurred in the regions indicated by Ashwini, the star that Mercury was transiting at that time. A main condition is that there must be no malefic planets like Saturn and Mars in the sign opposite (180 degrees away) to Mercury. That sign is Libra which was empty at that time.

There are not many clues astrologically for finding the location where rainfall occurs. I am checking with the Kurma Chakra (Division of the Globe) given by Varahamihira in Brihad Samhita, Chapter 14 and also the directions indicated by the 12 signs of the zodiac. (Starting from Aries, the directions repeat in the order East, South, West and North).  As per Kurma Chakra, the star Aswini indicates in the regions of the North and North east in the Himalayan regions. The two places of this region that are known by the same names even today are Kashmir and China. 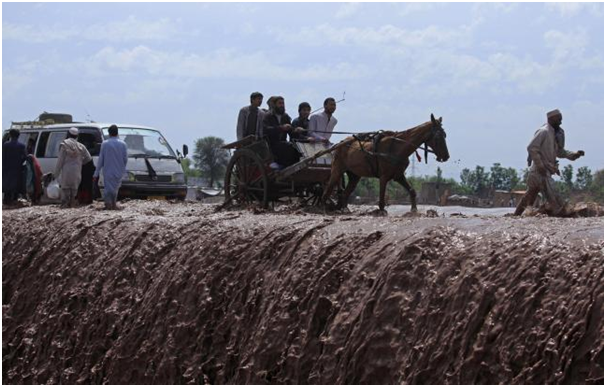 (Residents use a bridge covered with floodwater after heavy rain in Nowshera District on the outskirts of Peshawar, Pakistan April 4, 2016.)

Within this period of re-emergence from combustion of Mercury in Aswini, New Delhi also received thunder showers.

The subsequent dates of importance to meteorology were written in article on April 2, 2016 titled March Garbottam confirms rains during Navarathri!

It is reproduced below: 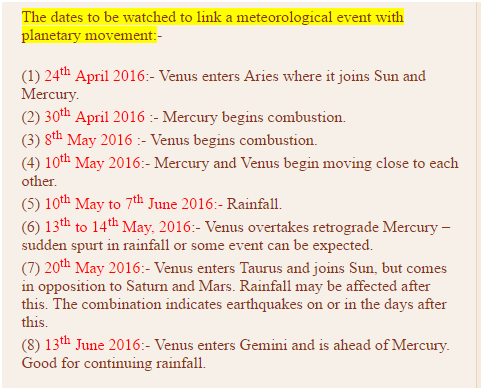 The first important date is 24th April 2016. It was on this date Venus entered Aries to join with Sun and Mercury. When these three planets are together in Aries, pre monsoon showers are possible provided there is no malefic planet in the sign opposite to them (Libra).

By the evening of 24th, sudden emergence of easterlies laden with moisture was reported by IMD. This happened after a long period of oppressive heat in Chennai.

The evening sky in Chennai, for the first time in April started showing clouds accompanied with cool winds on 24th when Venus was entering Aries. The following photo shows how it appeared. 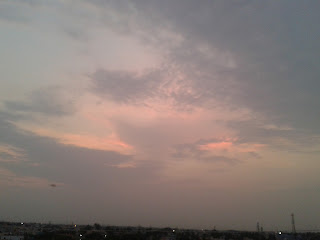 It was on 23rd, that is, when Venus was within one degree of entering Aries, rains started in North neat India, particularly Assam that resulted in heavy floods affecting 45,000 people.

The news report on this first rains and flash floods can be read here. 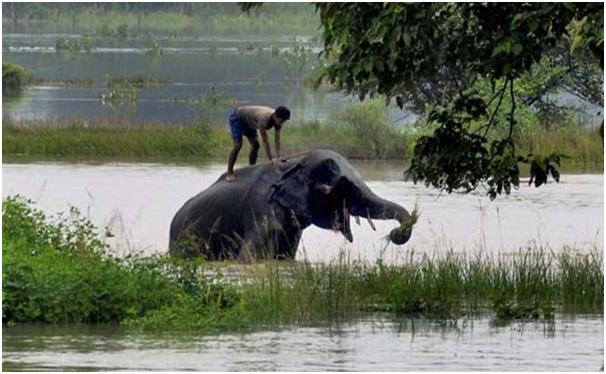 {Several people have been affected across four districts of Assam in the first wave of floods.}

From that time onwards thunder showers are occurring in the Himalayan States on North and North East.

The second date in the list I had given was 30th April when Mercury went retrograde and also into combustion at 14 degrees away from the Sun. On that day Venus also started its combustion period (according to one school of thought) at a distance of 10 degrees from the Sun. It was in the star Aswini. Right from that date many parts of India, particularly North Eastern States started receiving thunder showers. As the sign is Aries which signifies East, the eastern cross section of India also started receiving rains. The absence of any planet, particularly a malefic one in Libra in the opposite sign facilitates continuing rains for the period when these three planets (Sun, Venus and Mercury) are in Aries. 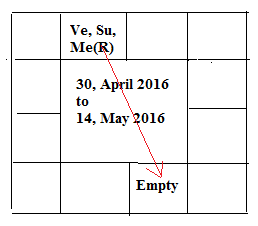 During this period, the gap between Venus and Mercury is getting reduced due to retrograde movement of Mercury.

The 3rd date I have given in the list is 8th May when Venus begins deep combustion by coming within 8 degrees of the Sun. By 8th May, both Mercury and Venus are in combustion with Sun and are moving towards each other. They both are in the star Bharani which also signifies North east part of India. The sign Aries indicates eastern side of India (from North to South)

The 4 PM and the 8 PM bulletin of IMD show favourable conditions for rains with a particular mention of formation of a low pressure trough in South Andaman Sea. 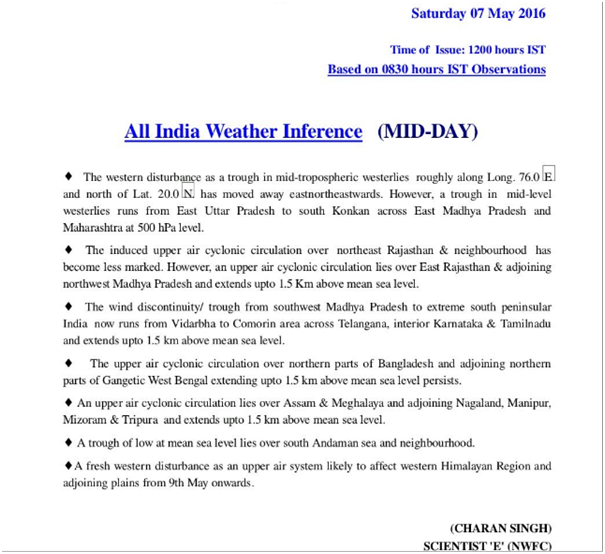 The next date I have given in the list is 10th May when Budha- Shukra Saameepya or the closeness between them starts which means arrival of good rainfall. On this date and until 20th May these two planets will be closing on each other with no planet in the opposite sign of Libra. Therefore I foresee a good rainfall during this period (between 10th to 24th May)

By the direction of the sign and the star in which these two planets are transiting (Bharani), I deduce that eastern cross section of India (from North to south) and North eastern States of India would be benefited by this rainfall. Otherwise the local Garbottam factors are the only source to decide whether there will be rains in a particular place. Observing the rainfall places during this time will help me to fine tune the prediction on location.

The next important date is 13th & 14th May when Venus will overtake Mercury and will start moving in front of Mercury. As per rainfall astrology this is an important trigger for good rains. We will wait and see.

On 20th May Venus enters Taurus and joins with the Sun. Generally this is a good indicator for rainfall. But Saturn and Mars are in opposite sign to them (Scorpio). This will reduce the rainfall. This condition continues till 13th June when Venus will enter Gemini and be outside the ambit direct opposition from these malefics. 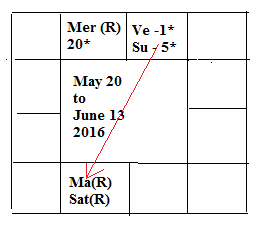 However within this period the Budha – Shukra Saameepya continues until 7th June. That is between 10th May and 7th June, there must be good rainfall due to the closeness of Mercury and Venus. From 20th May onwards, the opposition by malefics start. That leaves effective rainfall period between 10th May and 20th May only. We have to wait and see whether Budha- Shukra Saameepya over rules the effect of opposition by malefics.

If the malefics in opposition mars the rainfall, that means a delay in the arrival of SW Monsoon or deficient Monsoon in the beginning.

However the entry of Venus into Gemini on 13th June and the forward march of Venus ahead of Mercury and Sun from then onwards ensures very good rainfall.

Venus will be in Mrigashirsha at that time and in the sign Gemini. Gemini stands for western part of India thereby indicating very good rains in the western cross section of India which is the usual path of SW Monsoon in June.

As per Kurma Chankra, Mrigashirisha indicates Madhya Desa which include places bordering Yamuna and Saraswathi, Madhya desa, Panchala, Kuru, Saketa (Ayodhya), Pariyatra mountains. This shows that the Gangetic plain would receive good rains when Venus will be in Gemini which is between June 13th to July 7th 2016.

The following are the places (olden names) that come under other stars of Gemini namely  Arudra and Punarpoosam. This covers the eastern part of India from Kasi in the North to Tamraparani in the South.

{Will continue to observe the rainfall features and planetary movements and post updates.}