There is a confusion in the name of the New Year that begins tomorrow (14th April 2017) among some people of Tamilnadu. Some Tamil almanacs mention the New Year name as Hemalambi, while most Tamil almanacs mention the name as Hevilambi. The issue is that the prediction for the year differs with these two names. Hemalambi predicts bountiful rainfall whereas Hevilambi predicts lack of rainfall or delayed rainfall. In this post I have attempted to look into the differences from my current knowledge of this topic. 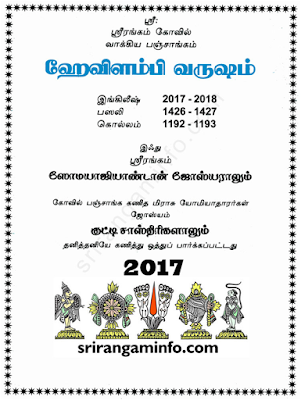 The names of these Years gain significance as they stipulate some major events expected to happen in that year.  Besides there are predictions on overall prosperity for the land based on expected rainfall, the resultant agricultural production and the price level. Our ancestors (sages and siddhars) have written predictions on these lines for all the 60 years of the cycle. Hemalambi and Hevilambi do not come with the same prediction.  Such a difference is not observed in the names of the other years.

Year and predictions vary from region to region

One major feature that can be noticed is that the New Year does not begin on the same date throughout India. The differences can be attributed to the regional rainfall activity (which is not the same throughout India) and the kings or dynasties who laid down their own systems based on the advice of the astrologers.  However most regions seemed to follow the 60 year names of the Jupiter cycle (Brihaspathi chakra). From the records of Asiatic Society (1840 edition), it comes to be known that the same cycle was followed in Tibet and China too.

·       North east India including Bengal and Tibet together followed the Jupiter cycle which begins on the year Vijaya (in the 60 year cycle). Vijaya is the 27th year in the cycle that starts from Prabhava. The reckoning of the years is based on Surya Siddhantha.

·       There is another rule known as Jyotistava by which the years are calculated from Prabhava (the first year of the cycle). This is followed in Tamilnadu.

·       A 3rd rule was known as Telinga rule in which the year starts from Pramathi. Pramathi is the 13th year in the cycle that starts with Prabhava. The records of the Asiatic Society say that this method was prevalent in Peninsular India at that time (till 1800s).

Based on such variations in application of rules, the upcoming New Year must be Keelaka and not Hevilambi. Presently North Indian regions follow Telinga rule and as such the New Year is Keelaka in many parts of North India. This shows that the names (based on rainfall predictions) and methods have changed completely between North and South India.

The name Telinga in Telinga rule sounds like Tailinga / Telunga, the region of Andhra and Telangana. They follow the same cycle starting from Prabhava as we do in Tamilnadu. However the Yugadhi (Lunar year) that marks their New Year is Hemalambi and the predictions point out to good monsoon.
But the prediction for Hevilambi written in Tamil by Idai-k-kaattu siddhar gives an opposite view. 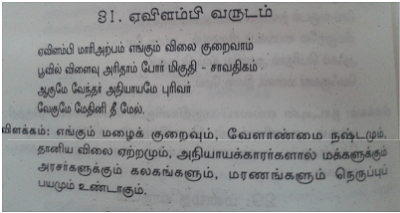 The story of Idai-k-kattu Siddhar shows that he had rewritten the Year predictions as he found the then-existing predictions not coming true. According to that story he saved food for himself and his goats expecting a drought year whereas the year prediction was a bountiful monsoon.  Others remained hopeful of good rains, but the expected rains did not materialise. As a result, while this Siddhar and his dependants remained unaffected by drought, others in the lands suffered a lot. It was only after that, the Siddhar was supposed to have written down his predictions for the 60 year cycle. His predictions are still being quoted in all almanacs in Tamilnadu. As such Hevilambi is not expected to see good rains this year. The word ‘vilambi’ in Hevilambi means delay or decline in Sanskrit. The ‘He’ in Hevilambi is vocative case that is used to address, like “oh, Vilambi!” . This indicates that there would be a delay in rains or a decline in the amount of rainfall.

The next year is Vilambi which also means the same. But coming after Hevilambi, it indicates somewhat better rains than that is realised in Hevilambi.

The story of the Siddhar and the re-worked year prediction shows that what was used until then was found to be unsatisfactory. This was perhaps due to the reason of the rainfall scenario being totally different in Tamilnadu from what is experienced in the neighbourhood, say, in Telugu speaking regions or in Kerala. 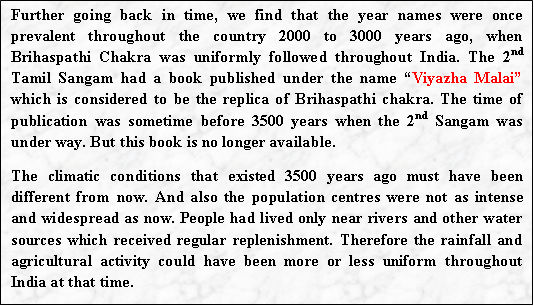 Though Kerala also follows the same year cycle, I doubt whether they follow the same prediction. I have no idea of the predictions in their land. However, based on the historical records, I found that they were following a different Era until a couple of centuries ago. It was the Parashurama Era and was followed in the western coast right from Mangalore in the north till Cape Comorin in the south, including the stretches of present day Kerala. Thinking of this Era followed in this specific region, it is absolutely relevant as the whole stretch of this region come under the same type of rainfall activity.
Thinking on similar lines for Telugu speaking regions, they cannot have the same year predictions for all the 60 years as given by Idai-k-kattu Siddhar.  This year being Hemalambi for them, they can expect good rains in their lands while Tamil nadu may come under the effect of Hevilambi.

Origin of the name, Hemalambi

The cycle of Brihaspathi (Jupiter) mentions Hemalamba and not Hevilambi. All the names of this cycle have been taken up by the current systems used in different parts of India. In the case of Hemalambi, the name is different and the prediction is also different for Tamilnadu.

The 60 years of this cycle were divided into 12 yugas having 5 year duration each. The Yuga at human scale, as relevant for Vedic life was made of only 5 years. Hemalamba / Hemalamva (Hevilambi for Tamil nadu) is the 31st year or the first year of the 7th yuga in Jupiter cycle.

The prediction for Hemalamba in Jupiter cycle expects damage of crops due to storm and rains. It does not speak about delay or decline in rains as predicted by Idai-k-kattu Siddhar. Going by the tradition of usage of this cycle in Bengal and NE India until 1800s, we can expect this prediction becoming true for those regions.

As Kerala was under a different system (Parashuraam Yuga), the predictions can be different from what Indai-kkattu Siddhar says or even what Jupiter system says.

In the final analysis, we can say that the Jupiter cycle which is still present throughout India had seen modifications in the past as Siddhar had done.

As Siddhar- prediction expects a drought for Tamil speaking lands, we can take a cue from Jupiter cycle to look for remedies.

With drought already having set in Tamilnadu and a fall in rainfall expected (as per my rainfall research too) this year, let people worship their departed ancestors with all fervour and devotion. May the water droplets offered to them come back as rains for all of us! 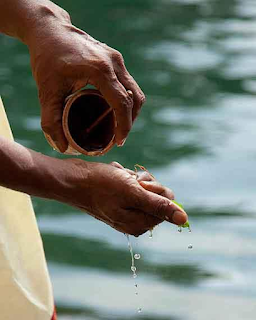 I request readers to write their views / comments / questions relevant to the blog-post.

Less rains this year in TN is quite worrisome

Thanks madam....Just looking for the meanings of regional new years on google and finally got it here....keep posting about such dharmic things

Madam, this year is vilambi in Andhra and Telangana. What Vilambi means and what is its significance?

Thanks for your appreciation.

Vilambi means - late, delayed, slow or measured. The rainfall is likely to be so. Check out this article of mine here: https://jayasreeweatherblog.wordpress.com/2018/02/19/rainfall-2018-panchanga-based/