“Recent events have shown that the SM is starting to influence discussions and debates on TV, newspapers and news sites. This is one of the most heartening developments in our country. SM puts power back where it belongs: in the hands of ordinary people. Those who pooh-poohed the internet, blogs, Facebook or Twitter will not be able to ignore these anymore. Those who adapted to these new communication tools will benefit from it. In a few years one can expect the SM to become the more dominant voice in public discourse. The MSM does not have the monopoly on dictating the national discourse anymore.” 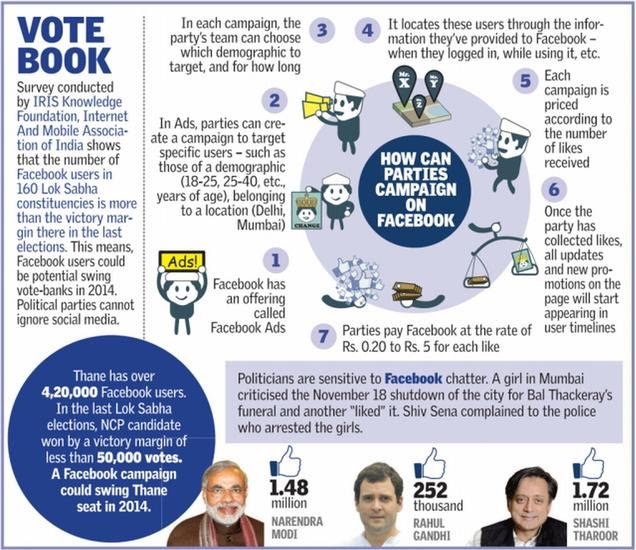 The Thane parliamentary constituency has 1.8 million registered voters. Of them, 7,50,000 exercised their franchise in 2009. Sanjeev Ganesh Naik of the NCP won the seat by a margin of 49,000 votes over his nearest rival. As he prepares to face the voters again, he will find that almost 10 times the number of voters who made a difference between his victory and defeat are now on social media. In his constituency, 4,19,000 people use Facebook. Will they allow the NCP to retain its edge, or exposed to newer forms of political communication, will they swing the other way?

A study, a copy of which is with The Hindu, has, for the first time, shown how social media can affect the results of the next Lok Sabha elections. Conducted by the IRIS Knowledge Foundation and the Internet and Mobile Association of India, the research claims that results in over 150 constituencies could be decided by ‘Facebook users, making them the newest vote-bank with the power to shape Indian politics.’
Adopting a ‘straightforward’ methodology, the research assessed the number of Facebook users in all Lok Sabha constituencies. It then measured the margin of victory in these seats. There are 160 ‘high-impact constituencies’ where the number of Facebook users exceeds the margin of victory in the last election, or constitutes 10 per cent or more of the voting population.

In 67 other ‘medium-impact constituencies’, Facebook users comprise over 5 per cent of voters. Politicians here, the study says, ‘cannot afford to ignore social media.’

Admitting that the ‘approach may seem simple to the point of being simplistic,’ it lists out the caveats. It does not factor in whether the social media users in each constituency are active. It does not examine other factors like ‘anti-incumbency or political realignments.’ And while Facebook may be a common medium, those using it are a heterogeneous lot.

However, researchers say their limited objective is to assess the ‘clout of the social media … and if Facebook users will have an impact, if they so choose.’

The study shows that 75 of the 206 seats won by the Congress and 43 of the 144 seats where it finished second are in the high-impact constituencies.

For the BJP, this is true for 44 of the 116 seats it won and 50 of the 110 seats where it came second.One-third of the seats the leading parties won earlier could thus be affected depending on the preferences of social media users. “A well thought-out social media will not only be about retaining previously won seats, but also wresting new ones.”

The study reveals that social media use now extends to small towns, and will allow candidates to communicate with voters even as polling is on unlike traditional campaigning, which stops 48 hours in advance.

Social media is likely to influence politics and elections in 160 of India’s 543 Parliament constituencies, making Facebook and Twitter users the nation’s newest voting bloc, a new study suggests.
In these mostly urbanizing constituencies, social-media usage is now “sufficiently widespread” to influence the outcome of a general election slated for 2014, the study by IRIS Knowledge Foundation and supported by the Internet and Mobile Association of India (IAMAI), indicates.

On April 4, Congress scion Rahul Gandhi’s high-profile address to the Confederation of Indian Industry, a leading business forum, was trending topmost on Twitter in India that day, some posts by rivals mocking him.
A series of lectures by Gujarat chief minister Narendra Modi, a presumptive PM, this week too garnered strong social-media attention, with his and Gandhi’s supporters competing online to run the other down.
A deeply polarizing figure still, Modi is often accused of watching over a carnage that killed nearly 2000 people in 2002, mostly Muslims. Yet, he has pulled off a stunning online strategy to showcase Gujarat as India’s Guandong, a south China province with top GDP rankings and investment.

Research shows that social media is more persuasive than television ads. Nearly 100 million Indians, or more than Germany’s population, use the Internet each day. Of this, 40 million have assured broadband, the ones most likely to have at least one social media account.

“Unlike Obama, who used social media directly for votes, Indian politicians have tended to use it more to mould public discourse,” says Sunil Abraham, the CEO of The Centre for Internet and Society.

That is likely to change in 2014. Not surprisingly, Modi became the third politician globally, a fter Obama and Australian PM Julia Gillard, to host a political conference on Google+ hangout.

Social-media-impacted constituencies, according to the study, are those where Facebook users are more than the victory margin of the winner in the last Lok Sabha election, or where such users account for over 10% of the voting population.