Vaata – prathi-vaata, no one can beat the Dravidian politicians in this!

Even if it is about what they are going to do to reduce the burden of hiked-up price of the domestic gas, this brand of people would come up with unique pearls of wisdom to score a victory in winning the wordy duel with others than with palpable solutions to solve the issue.

The State Electricity Minister who has an uncanny ability to demonstrate his prowess in this, has in the earlier occasions made us look for winds to know whether we would get un-interrupted power supply that night from wind-mills!

Now, on the issue of why not the government reduce the sales tax on domestic gas as was done in Congress-ruled States, his reaction comes out with a pearl of wisdom!

Why should his government worry about the plight its citizens?

If only the Governments in congress-ruled states had followed his government’s policy of giving freebies, his government too would have extended this tax reduction to its (Tamil nadu) people, taking cue from them (congress governments)!!

Luckily for , voters of and Karnataka had rejected the freebie offer by Congress. People seem to know better economics than our Dravidian politicians, particularly when it comes to unproductive expenditure by the government, that can only benefit politicians. 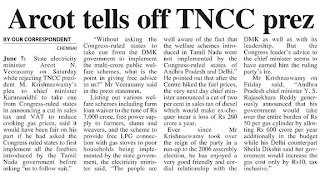 Email ThisBlogThis!Share to TwitterShare to FacebookShare to Pinterest
Labels: Pearls of wisdom, Politics