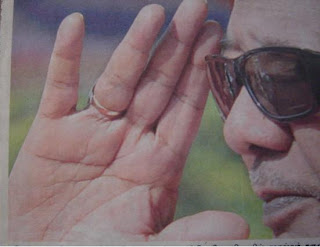 A wonderful line of ‘padhavee’ is seen in Mr Karunanidhi’s hand.

(this is known as Fate line or Line of Destiny)

Look at the strong, un-interrupted vertical line from base of palm

going towards the middle finger.

It gets stronger and darker after 35 years of age.

From 28 th year onwards, he stated seeing money from that position/ padhavee / clout.

But till the end it is going towards middle finger only and no leanings towards index finger region.

It is money, money all the way - sans exalted status of respect

which Guru (Jupiter) is capable of giving.

His power is due to his position - not to the person as such.

But the tip of the line at the top slightly bends towards ring finger.

The sun helps him and gives a name to him in the field of art and intellectual pursuits.

He will be better remembered for that, than for the profession - which is politics.

"An easy way to know whether one’s past karma is

good enough as to give one good ‘padhavi’,

look at your right palm (for right handers, and left palm for left handers)

going towards the middle finger.

A leaning of that line towards index finger

indicates an exalted nature and respect from that padhavee.

A broken or absence of line indicates a life to be endured.

A wonderful line of such ‘padhavee’ is seen in Mr Karunanidhi’s hand."